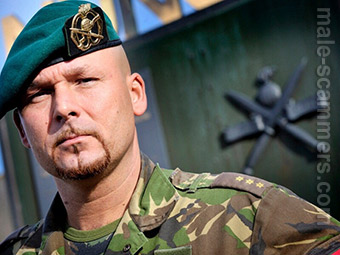 REPORT N1 (added on September, 20, 2021)
Deborah (Indonesia)
He introduced as Marco Kroon, the famous Major from Netherlands. he sent me a message on facebook under the name of mark william. he asked me to check his data on google. it is written he was born in 1972 but all his information is different from the one he wrote on facebook. he said he sent me a photo of his passport but i found it weird since his photo was editted. he intensively chatted day and night. he said he was a soldier and busy but he could chat with me the whole day and said that he loved me and wanted to marry me. it sounds crazy because we just chatted for less than a week. his question that is bothering me is when he asked whether i have my own apartment. . then i asked about his son. he sAid his son was studying inGhana, which is quite strange for me with the reasons why he should send his adpoted son there instead of Netherland. he said because he is a a public figure so he doesn't want public eyes on his son. i asked the e mail of his son and i sent it and got a reply and what a shocking coincidence that his son said he needed money due to his credit card was inactivated and he asked my help to tell his father because Marco Kroon didn't e mail him for a month. i forwarded his e mail then Marco insisted me to send his son some money. i found it weird and then i suggested him to contact his headquarter or friend but he said he could not do that without logical reasons. i blocked him already. he always avoided talking using video call. he just used voice call. his reasons are because he was not allowed to video the camp where was staying.