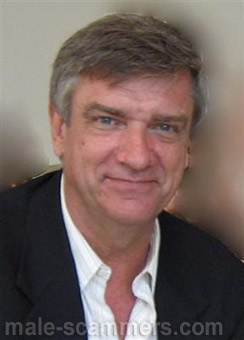 REPORT N1 (added on August, 14, 2015)
Sandy (USA)
I met him on OK Cupid. July 8, 2015. He immediately wanted me to move where he was. He started calling me his wife and became very controlling. His profile showed he lived in Lincolnton, NC but he told me he lived in San Diego. He went to Canada for two weeks for a contract meeting and was coming to meet me before going back home, he wanted me to go home with him. I said no. He was awarded the contract and left to go to Malaysia instead of coming to see me and would come to me before returning home after his work in Malaysia was completed. When he arrived he started having issues and started asking for money. He started asking me to open a bank account so he could wire money to me and I said no, then he needed money to rent a piece of equipment and wanted $10,250. I said no. He kept texting but I did not respond. He is now on Match showing he is living in Raleigh, NC but he is suppose to be working in Malaysia.
REPORT N2 (added on April, 24, 2017)
Margaret (UK)
Met this man calling himself Cecil Joseph on match. Shortly after which he flew to Malaysia to secure a building contract. He said he was an engineer. Over two years I was scammed out of ?63 thousand UK pounds. I now notice he is on this website under the name of Jason Jeter.

Romance scam letter(s) from Jason Jeter to Sandy (USA)
Good Afternoon My Wife,
How are you doing ?...Sorry for not getting back to you since morning honey,I'm not really happy honey,I'm ready to take it easy and slow as you want it and i want everything to go just well fine.I had just been thinking about you and lot of questions have been popping up into my head like are you the one i have been looking for?will you meet up to my expectations which are just very simple,Honesty,sincerity,understanding,loving,caring and unique?dislikes dishonestly,bossy,jealously,acting superior..Which you are qualify for all this qualities.Well all this makes me think and baffles me because i want to make you the Queen of my heart and give you your own special palace and serve you forever yes i have felt like that with other women to be honest and i believe yours is different and strong because you are a unique in a special kind of way.I so much believe in this feeling because it as strong as it is for you because you've been totally hon
Read more