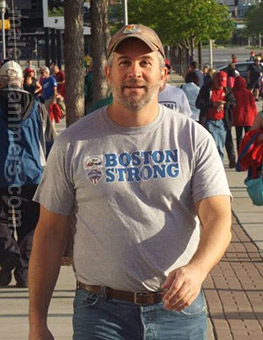 REPORT N1 (added on August, 14, 2015)
Linda (USA)
He contacted me. He would not use Skype nor Facebook. Also, broken English, but he said his first language was Italian. He did sound Italian on the phone. He did not request money yet, but I felt like he was working up to that request. I found his emails on this website and realized that I was being scammed, so I stopped all communication with him. He persisted for about five days, emailing, calling, and texting me.
REPORT N2 (added on March, 4, 2016)
Elizabeth (USA)
Met online at Christian Mingle. He claimed to be widowed since 2009 and had not dated since,because he was raising his 17 year old daughter, Ashley, who was now a senior in high school. His profession was an independent contractor in petroleum and during our communications, he was awarded a contract for offshore drilling off the coast of California. He was to be there for 3 weeks and then get a 1 week break in which he and his daughter were coming to meet me. Communications were via emails, texts and phone calls daily.He claimed to be half italian, but I thought his accent sounded Nigerian. I even had emails from Ashley, which I think were written by him, because the grammer and punctuation were the same as his and did not seem to be from a 17 year old planning to enter college the next year. As the relationship developed, more and more red flags popped up and eventually I discovered one of the photos I had of him and it came up with the name Richard Carvalho.
REPORT N3 (added on November, 2, 2016)
Sam (USA)
He met me on Christian Mingle. I am a widow and he said he was too. He instantly captured my heart with his phone calls, texts, pictures and affectionate letters. He is extremely good at what he does. He is quite the smooth talker and always knows exactly what to say. He knows the Bible like the back of his hand. He said he attended the Assembly of God church in Miami.
He said he was born in Milan, Italy. Although, he does not speak much Italian and his English accent and grammar should be much better since he has lived in America over 35+ years. His birthdate was 9/19/56. Only son to his Italian dad who passed away in 2006 and his American mother who passed away in 2009. They moved to Miami, FL when he was 24 years old. He went to college in CA and met his wife Michelle. She died in a car accident in 2009.
His website is http://rmdrilling.com/en . He received an oil rig contract in CA, near Sacramento for $7 million, then said later it was for $5M. He had 9 workers with him. He has been there since April 2016 and is supposedly still there today at the end of Oct 2016. He has endured many problems and shortfalls with needing parts and money. (Same story I've read about on many blogs for scammers.) He did ask for money and he is affiliated with Vuyokazi Bopheka in Cape Town, South Africa at letsgop@outlook.com posing as his broker.
I paid for a background check on him and it came back clean. Over the months, I kept googling his name, because something just didn't seem to add up about him. Finally something came up on Richard Mertinze with dating scammers. After googling on many sites, I finally put the pieces together that Richard Mertinze had used several aliases, like Richard Carvalho, Richard Scott and Richard Williams. His pictures were the same guy I had been talking to.
Typical storyline, he was going to be rich, he was going to move to Texas (where I live), we were going to get married, told me to find a house for us to buy, he would be finishing his contract soon, we would go into business together, he loved me with all his heart, he would sing to me and talk of how we would serve in the church together, etc. He said he would have Serena fly from Miami to Texas once he was finished with his contract. She had been staying with a friend of his in Miami, which became more unbelievable the longer I had conversations with Richard. Every day he texted "I love you, kiss kiss kiss".

Romance scam letter(s) from Richard Carvalho to Linda (USA)
Thank you for your message Its a pleasure to read from you. It would be great to share my story with you because when I am pursuing a relationship, I do my best possible to make it work. I am a dedicated Christian I attend church services as much as I can. I was born in a beautiful city of Milan in Italy and was raised in a Assembly of God home, my mom is from America why my dad is from Italy,
Am a single dad and I have a lovely daughter and she is currently studying, she is 15 Years of age and she is very precious to me I am a gentle man and am honest, caring ,loving and am very patient , I like someone who has such virtues, my slogan in life is that : money or diamonds cannot buy happiness and laughter, I don't believe in money and riches all is believe is true love deep from the heart and one in which exist for all eternity, I love you drop me your your contact email that we be easy for us to keep in touch
Life has not been easy but i have to do my best to be a
Read more

How are you doing? Hope you had a good night? I was introduced to this by a friend who got his wife from online date and they are happily married now. I am looking for a friend and a serious relationship that will lead us to marriage base on the giving law of marriage laid down by God, eternal marriage,

More about me, I am the only child of my parents. My Dad passed away 2006 The death of my Dad was too hard for my mom to handle and she was getting high blood pressure regularly so she was spending most of her time in the hospital and she passed on 2009 the same year I got Divorced and the mother of my Daughter die in a car accident though the marriage was blessed with a Daughter. Since the death of my wife have not gone into any relationship because it was very hard for me to handle loosing two people that are very close to me in one year it was terrible; and my Daughter who doesn't have a mom.

I have a Professional degree in Business Administrati
Read more

Romance scam letter(s) from Richard Carvalho to Sam (USA)
How are you? Hope you are having a wonderful weekend? Please reply me back if you receive this message and I will love you to tell me more about yourself. stay bless and hope to read from you soon

Thanks so much for all the emails we have share it has really been a long time since I share my day with someone no matter what life brings to us we will be grateful we have the chance to know each other as a friend and I just have to keep my finger cross. I have to apologize when you don't hear from me early that does not mean I am Ignoring you, I am just busy rounding up all paper work and everything and I will be glad to finish and be able to write you more.

It is another nice day in Miami. I was suppose to take my daughter out to dinner last night, but I couldn't because I was so tired yesterday.I want you to know I grow to believe in having a soul mate and a life-long loving relationship. I really do
Read more