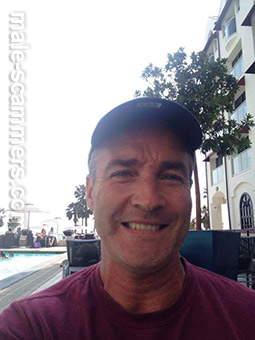 Romance scam letter(s) from Johnson David to Eloha (USA)
What a lovely and sparkling smile. I would not trade that smile into something. I do not know you; I am looking for an old friend, when I came across your profile. I got entangled in the wonderful smile that could not stop me from saying hello. Please always wear that smile ... Hope to hear from you soon.!?

Hello dear, it is a privilege to see on your profile, I was attracted to you profile photo I will say I adore your beauty, and I will like to know more

your fascinating and uncommon profile on here was great... Mostly That lovely smile you have Amazed me and that stunning beauty peaked my interest and made me contacts you. I came here in search for a serious relationship that will lead to marry if you are still a single please add me up on skype so we can get to know each other more better, williams.morgan682

Romance scam letter(s) from Johnson David to Ann (Finland)
Hi .
I'm just sending you this message so you can ybabs my email and we can talk on here .

Thanks a lot for the picture . You are a beautiful woman and you are to be called a damsel , I admire you so much on this .

This pictures of me are really recent once ... It's a busy day out here but I will always find time to reply you darling . Kisses and hugs

Darling I'm on my way home now and I wish you
Can wait for me to get home and we can talk for
A bit but I understand if you need to rest . I'm gonna miss talking to you honey . Have a good night rest sweetheart ...

I'm thinking of you and wish you a great
Read more

Romance scam letter(s) from Johnson David to Therese (Canada)
Hi Sweetie and how are you doing and how is everything with you? i know you must be in bed and worried about me ,I miss you so much and i wish that you where on the flight with me to (TURKEY ISTANBUL...). I was thinking about you all through in the flight and when i even wanted to get some rest while we where still flying but i couldn't because the thoughts of you was on my mind all the time.We had a wonderful flight and we got here in a safe condition......
Though all is not well right now because i am having problem with the Custom Authority regarding the amount of money i brought into the country and all the money i am having on me has been withheld by the Custom Authorities that they have to make some investigation on why i brought that large amount of money into the country. I have tried to explain things to them even the company in U.S and the one in UK did the same they are still insisting that their investigation must continue.I have made contact with the B
Read more