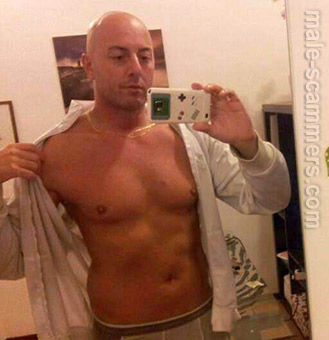 REPORT N1 (added on July, 29, 2015)
Ras (India)
Hi, This is to bring to your notice that recently I joined Tinder and this is the first time I had ever gone on a dating site. Totally new to this online dating world I liked a profile and within mins I got response from this person. He called himself Anthony J Francis and told me that he is a Mechanical Engineer living in Scotland and he works as contract for Shell company. We started chatting he was like he is very wealthy and he would like to invest in India, buy house here etc. it did surprise me as to why he would want to leave his well established work in UK and move to India. He told me he is winding everything up and coming to India where he would marry me and settle down here. On the day of his so called arrival to India he tells me he could not get direct flight to Delhi so he has landed in Mumbai and then he tells me he was carrying 7 million worth of goods that has been seized by customs and now they are harassing him. He then tells the he urgently needs 85000 eight five thousand rupees transferred in his account immediately so that he can pay the custom duty for his release. It was then I realized that he is no wealthy person coming to settle in India but some scamprter . There is a lot more to it but I am just telling this in brief. Also he would talk with lots of confidence say things like my whole family knows about you and would always just talk of marriage and all grand things he wants in life. From tinder he said come to what's app as its a better chatting app. He would always portray himself as very god fearing person and wanting to do everything in the name of God. I have never felt so stupid and foolish in my whole life. The tinder in India is infected by these Nigerians scammers posing as UK nationals . They have profile pics of some foreigners and when you chat with them they are like they are on business trip to India and then they will ask for your ph number so they can connect through what's app. I wish I could contact the original guy and let him know that his pics are being used to scam girls in India. He is on Facebook too under the name Tony J Francis. Can this fraudster be stopped some how? How can he be reported. Pls help and save other girls from falling into his trap.