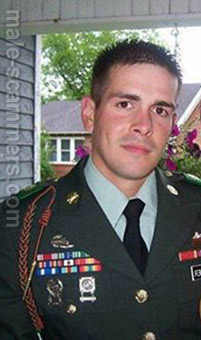 REPORT N1 (added on July, 7, 2015)
Lyn (USA)
He contacted me saying he was in the US Army for 17 years, that he was a single dad and that his mum had custody of his son. Said he was on a peacekeeping mission in Nigeria to help fight Boko Haram. He wanted me to send him pictures of myself but I also had to send a package of items he needed like underwear, bible, cookies, cream, body wash, boxer shorts, and testosterone supplements. He also wanted me to send him my iPhone so he could make contact with me. Said had an iPhone 6 that he lost on duty. When I asked him for the address to send the package he told me to send the box to Lance Joe, 33d Army Barracks, Nigeria.
REPORT N2 (added on July, 18, 2016)
Kristin (USA)
This guy matched with me on Tinder. He asked if we could talk via kik. He told me he was in GA but comes to OK twice a month. He said he was a widow and has two boys that are 3 and 5. He said they live in TN with his mom. After talking for two days, he says that he's in love with me but he's very sad because he's getting deployed near the Egypt/Isreal border because some of our troops were attacked there and that they would be there for 4 months to investigate. He said he would do whatever he could to contact me once he got over there. I was becoming pretty suspicious because his English and the words he used didn't make any sense. I asked him for his army email address and he told me that he couldn't give it to me because he could get in trouble but once he was deployed he would talk to his captain about it. He had also asked me for my mailing address and email address which I would not give him. A day or so after his supposed deployment he contacted me saying he was using his captains phone and that he had spent the money that he had brought with him. He said he would need money for a internet/calling card. I had already checked into several things and knew he was lying so I called him out on it. Needless to say, he hasn't contacted me since. I've also blocked him from contacting me via kik or Facebook.