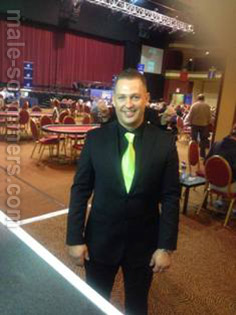 REPORT N1 (added on April, 30, 2015)
Karin (USA)
I have been contacted on facebook by this man, received the first email on 14 Sep 2014 He wanted to continue communicating via email at first and soon after that wanted to talk on the phone to hear my voice, so he claimed. At first I did not want to get involved but soon he started telling me that he felt a strong connection with me and wanted to become involved romantically. He send me a copy of his alleged UK passport and I believed him. We talked via phone many times and also communicated by email. He also send me some information telling me that he was a widower with a daughter, who lives with his mother because he travels a lot due to his business. About 4 weeks later he first went to Texas buying equipment for a contract he supposedly had been awarded in Malaysia. After that he traveled to Malaysia to take care of the contract business. He did send me a phone number from Malaysia, which I called many times and was able to get through without any problem until beginning of December 2014, I was no longer able to call him. He then told me that I can call his UK number and if I miss him he will return my call. End of October he started to tell me that he needed money for an insurance on the contract and he told me he had asked people in the UK to help him and I was naive enough to believe him and send him money, first via Western Union and Moneygrams on 29 and 30 Oct 14, later by bank wire transfers. The first wire transfer took place on 3 Nov 14, the second on 10 Nov 14. In order for me to believe him, he emailed me papers showing me that he had the contract and put me down as his business partner. I wanted to meet him in person and he promissed many times that we would meet soon, after everything is finished at the contract site. Then he needed money for taxes, telling me that he was not able to open an account at the bank before paying these taxes, so here again I send him money, supposedly half of my share on 24 Nov 14, 26 Dec 14 and the last wire transfer was on 6 Jan 15. He even send me a paper via email stating that the taxes were paid.
He also wanted a copy of my passport, which I emailed to him, and now I am afraid my passport might be used to cheat other people. Again he promissed that this was the last step and after that he would come and meet me. Meanwhile, he constantly called me his wife and told me how much he loves me and misses me and every time I had doubts, he knew how to lure me into believing him. When I did not want to help him anymore, he cried on the phone and I fell into the trap again, felt sorry and helped him with money. After the alleged Taxes had been paid, he was going to come and see me and I had to send him airport information he could fly into, which I did. After my last wire transfer my bank called me and alerted me that I may have been scammed. Unfortunately, I called him and asked him and he got upset and said I should believe my "husband" and not the bank and that he his not afraid of the police either. So I had again falling into what seems now his lies. When I had believed he would come to the US, he then called me and said that the Malaysian government wanted him to pay a anti-terrorism act fee for $120,000 before he could touch his money, or take it out of the country. I was shocked and told him that I do not believe this and that he should talk to the government people, which he said he would. He also had wanted my bank account information,because he wanted to pay back the money I had loaned him for this contract job, which I did give him, but never received any money. Later he told me that the person in the government reduced the fee to $80,000 when he showed his UK passport. Well he had raised $20K so he said and I should get another loan for the rest. At this point I finally woke up to the fact that this man may have scammed me all along and did some research. Of course it was too late, my life savings had been gone plus some. After I emotionally and physically recovered I contacted various offices and found out that I had been scammed. By filing this complaint I am hoping that other women can learn from my mistakes.
I kept all the receipts and information for the wire transfers to the foreign banks if this is needed for further reference.