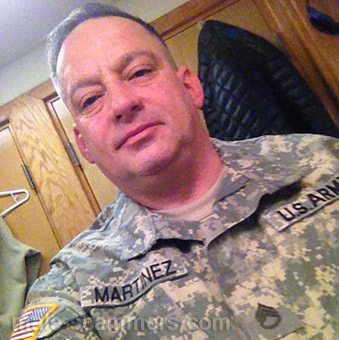 REPORT N1 (added on April, 28, 2015)
Lizbeth (Philippines)
I went to Skout because I know I will meet another scammer there, but this time after being a member of male-scammer, I had been careful watching out for the red flag, I changed my email. I met this guy Captain Hopper Martinez, who is with US army Fire department assigned in peace mission in Aghanistan, in just 3 days, we exchanged 70 emails, he tells me he is alone, and doesnt have a family, he even wrote me poems. on the 3rd day, he said he wants to see me, I thought will be using Skype, he told me to write to his commander for request for a 3 month leave and would come the Philippines to meet me, his commander wrote me that it was approved and I need to pay a certain amount in dollars. I need to send it through Western Union or money gram Name Laverne Jones. Now he will always ask me for the control number. Well since I know how a scammer works, I didnt send money.

The R and R Permissive Leave for CAPTAIN HOPPER MARTINEZ, Deployment # 37897887/377 was successfully received and he has cleared himself with the authorities in spite of a certain percent % indebtedness to the local authorities of where he resides at the moment. He has successful been approved of a leave to start immediately.

A Transit Clearance has been directly issued to you in a procedural reaction to the Leave Application of CAPTAIN HOPPER MARTINEZ, Deployment # 37897887/377 which is presumably to be spent in PLACE TO BE STATED IN TRANSIT.

The Transit Clearance will simultaneously serve as an insurance to cover the cost of handling of the luggage+ALL DOCUMENTS of the officer, Deployment # 37897887/377 who has notified us of his Leave to be spent with you there.

As soon as the transit is cleared. The Officer shall
Read more