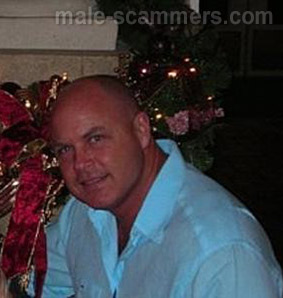 REPORT N1 (added on April, 28, 2015)
Mel (UK)
He first contacted me through match 2 months ago. We started private emailing and had contact everyday. He told me after about a week that he was in Ghana doing construction work. I never really had any reason to doubt him even though i was still slightly cautious. He told me that he was coming back to England at the end of this month with his daughter called Kim and his Maltese dog called Casey and that we would arrange to meet. He said his birthday was 25th December. He mentioned that he was having difficulty with the last container for his construction job but he never mentioned money BUT then he sent a message last week telling me that Kim had broken her leg. I was full of sympathy and then came the final part of his story. He told me that he only had insurance that covered him in America and that the Ghana hospital wanted big money for her surgery. He said that he had most of the money but could i lend him ?4500. I said no of course & now he is ignoring me. I have gone back on match & he is back on. I have also reported him to them.
I re joined match. 5 days ago and he was calling himself redjones345 and saying he was living in somerset, England. I reported him and he disappeared off the site. He is now back on the site as radydouglas62 living in Contlaw in Scotland England. I have just reported him again. Each time he uses the photo of him in the light blue shirt.

I don't know what happened to me whether I was crazy or just lonely, all I know is I was sick of being deceived, mistreated, and unloved. Then you came along, I don't know why. All I know is that I felt a connection on our first chat, something I had never felt before which at first made me feel uneasy, stupid

You really don't have to thank me for my emails to you my dearest heart. I am glad you love my words and that means a lot to me. I think we are both connected with each other now and it makes me really happy my love. You have nothing to worry my love cause you and I want the same thing and I feel the same way about you my love. I want to send the rest of my life with you honey cause I want this relationship to work between us.

I have to say I am moved to tears with your wonderful messages sweetie. It brings joy to my heart and I can't believe that I am reading all this from you my lo
Read more