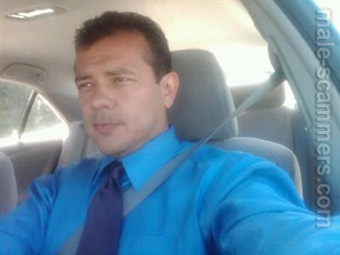 REPORT N1 (added on March, 27, 2015)
Lilley (USA)
I met this man on match in 11/2014. He said he was self-employed contractor in Texas.
Won bid on a job in South Africa and had to be there by end of the month.
Claimed to have been born and raised in Swansea, UK. Wife killed in auto accident 6-30-2008.
17 year old son named Smith who still lived in UK with his elderly father.
Was picking up son first and then going to S.A.
Once arrived, bag was stolen and his son was distraught because phone, game station, laptop, etc was in bag. After he convinced me to help that first time, a few weeks later another disaster. Mis-calculated funds and was unable to pay water and electric to keep project going. When I said I couldn't help, became angry and said I cared more about money than him. Then said he just needed money to get flight ticket back to US. I refused. I contacted him several times after that asking where my money was that he owed me.
REPORT N2 (added on September, 15, 2015)
Tammy (Canada)
So glad I found this before it was too late.

It is nice to hear from you .Thank you so much for your note and response to my request on the site. As a matter of fact, your personality as you stated in your profile caught my attention, your attributes really struck me right in my heart, who knows, may be this is the opportunity I have been looking for to find a soul mate. I am actually in search of that special woman i can trust and spend the rest of my life with. I will like you to give me the chance to know you more and more.

Though my profile says am in your area but I am currently in Albany, New York doing a contract job; i am currently having a job in Albany and San F , the san F job is 95% completed so it is only my workers that are there right now, but i am in Albany to also conclude my job that is about 70% complete. I registered on the site during one of my holidays in your area because i am planning on buying a home near the woman of my dream, my best friend/lover hence the reason
Read more