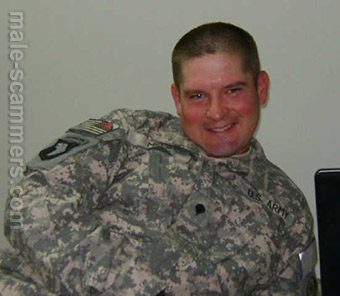 REPORT N1 (added on March, 27, 2015)
Mary (USA)
Contacted me. Said he saw my profile and was interested in talking. Said his friend, Fred, had met his wife on the site.
His pictured showed him in an Army uniform.
Meek, said that was his first name but it appeared on his uniform so probably someone's last name, said his wife had died from lung cancer. Said he had a daughter, Ashley and granddaughter, Kim, in San Francisco. Said he was originally from Dallas but graduated from HS in Washington. I could not find him listed at that HS. Said he was stationed out of Ft Drum in NY.
Was stationed in Kabul, complained that he had no food to eat. His friend Fred would share his foodstuffs with him. Earlier this week 3/16, was sent to Borno, Nigeria to help keep the peace during elections.
Today, asked me to sent $450 so he could buy food. I offered to send a care package but he refused to give me his address. Got rude and accused me of being .uncaring when I explained I did not have money to send him. Told me not to contact him again.