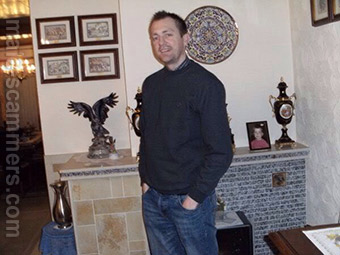 REPORT N1 (added on March, 26, 2015)
Alice (Borneo)
I knew this man from muslima, we start communication on viber on early February 2015. He claimed as a muslim, has a 8 year old daughter who lives with his mother in texas. He also claimed as engineer and geologist with excellent track records of educational background in well known university and experience in several companies (I keep his resume for prove). In the end of February 2015, he claimed he got a contracts with CNPC for 110km pipeline project at Hainan district, China. We always maintain communication directly or send a message through Viber. On 11 March 2015, he informed that he got first term of payment through check from CNPC and he couldn't get the check cleared since he had to submit registration to China Ministry of Commerce to get certificate (I keep scan of the check for prove). For the registration he ask me to send him US$2000 as short term loan and I said I didn't have that number, so on the next day i only sent him USD$1000 and ask him for Bank account. He said he didn't have chinese bank account right now and i had to sent it through western union to his translator Jiarong Chen. On 13 March 2015, he said he already submitted the document and will be proceed on 16 March 2015.
On 16 March 2016, he told me that his documents not completely processed because the Ministry said the local government tax payment receipt is missing, so he need to pay tax worth about CNY 29.800 (USD$4500). Therefore, he ask my help for the money issues. I'm very curious at that time, and the next day i try to gather information from China Ministry of Commerce until how to open Bank account in China, also try to find out whether this man is a scammer or not. And voila, i found his name on this website as well as i found all the information in his resume including address, phone number, etc were mismatched with all information that he gave me. I busted him, send him last messages on viber and he replied with impolite words and threteaned me. After that i block him from my contact list.
Thanks a lot for this site i was able to save myself from getting harm. Ladies please be careful with this man. He looks very polite, decent and could make you fall into him easily, but he truly scammer with a nice outfit.
REPORT N2 (added on May, 16, 2016)
Tuti (Java)
The story more or less is similar with Alice Borneo reported about Terry Williams only now his name is Josh Williams. I have transfered him huge money via WU to China received by Fengping Pan, which he said his translator. The same CNPC project story, but now he said, he got payment already 6 million usd from CNPC to his account in bank of china hongkong, but being freezed by hongkong central bank as the authority suspect his account is for money laundering. He needs money to pay lawyer and penalty 0.5% of the amount. I met him in muslima sitew. He also has w.a, viber and linked in.
By the time i m writing this. I just confronted with him all infornation about Terry Williams that is similar with him Josh Williams.
He said he s been set up and hacked by someone who s closed to him. And will report to the sites about this. I told him to do so. I havent blocked him. I wanna know end of his story. To all women, at the time your online date ask money, stop communication right away before your emotional binding, confuses you. At the time someone give you phone number, put in on the net and check. This guy is very nice and a real gentleman. His manner and language also shows he s as he claimed with 2 master degrees in gas and oil.