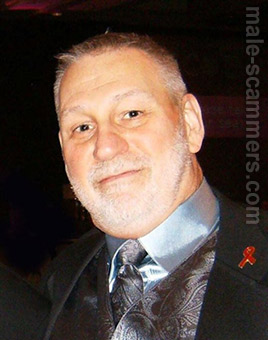 REPORT N1 (added on March, 20, 2015)
Brenda (USA)
He followed the general scammers profile. He began the communication saying he was in Los Angeles. He began very strong with emotions, he was told such. He did step back. He claimed his wife was killed I auto crash, he has raised his son alone. His son's name is Dennis and is senior in High School. He claimed he lived in Beverly Hills using an address on Crescent drive, a prime area in Beverly Hills. He claimed he had just purchased a new Lexus 400 series, he also had a 3 year old BMW. He represents himself as a very successful individual.
His first mistake was stating his son was going for a degree in computer sciences- the school he indicated he would attend was a trade school.
He claimed he handled contracts for United Nations and World Bank. He was an architect/engineer. Shortly there after he said he had a contract, was leaving for Nigeria to rebuild a pedestrian crosswalk. Questioned relative to necessary travel immunizations, malaria pills had he already received. . Once again he made errors. He was getting inoculations and then leaving. There is period of time for effectivesness, especially malaria pills. There was also a Ebola epidemic. He was taking his son with him, out of school. Said he would be gone approx 2 weeks.
He wrote regularly with the letters becoming increasing stronger his feelings of love. He was making plans for a life together. Originally work was going well, project on target. He indicated he was coming back to US shortly. He forwarded a reservation for the return flight. The cost of the tickets was $16,000. This was about $4,000 higher than should have been. Then he emailed saying he showed up to site and the tool company had picked up the tools. He claimed to be about 3-4 days from completion. The tool company wanted $27,000 for the rental. He asked to borrow the monies. He then said he made a deal and they would take less he wanted to borrow that amount. He said he needed to finish the job he would be paid $4 million. Would pay back at that time. Then he began to say he was meeting with Governor get their involvement. Originally he indicated they could not assist. He said he kept speaking with Governor, kept asking for monies. He then said they will let him out of contract and pay him for work completed which would be over $2,million, but he had to pay a certificate fee of $5,000. He then asked for that monies. Suggested he return his plane ticket, that was $16,000, he claimed he paid cash. He could take the monies, pay the certificate fees, still plenty for return tickets. He then claimed he could not get a refund, the airline would not refund. He asked again for monies, began somewhat aggressive. He continued to press for monies. I spoke to loan company who would lend him monies as long as he could proved US/ Calif residence. He gave all kinds of excuses why he could not get a loan. He kept pushing me for monies, wanted me to get a loan, sell something to get him monies so he could return. It gets to point I told him if he mentions money I hang up, and this did occur several times.
He then emailed a document from Govenor to demonstrate they will pay him the monies with fee. He further said he could not leave as passports being held until certificate fee paid. He then again asked for monies, said he was being ridiculous he lived in a home worth over 4.4 million, drove a car over $100,000, he can take loan against house, he should have bank relationship. He always had a reason none of this could not be done.
He kept changing what was needed $$ and I kept saying no. He would send loving, romantic letters. Then when he would call monies came up. The monies he was asking for kept reducing claiming he was able to borrow small amounts of monies.

I really appreciating your sweet letter and showing more seriousness and Interest of you..I am only dedicating all my Interest on you because you seems to be a very serious,sweet and responsible woman,I greatly appreciate every word you share with me and I will be looking Into your heart and see when I will be present.this Is all new to me,I have never done this for a long time nor have hope that dating network will work for me but just want to give it a try because my close friend met his wife online and they are happily married now, I am so happy having my daily Smile all day long at work that i found a special woman I am talking to on here.I want you know that this Is no dream ,because true love can start from any angle or corner you know what I mean aahaha..!! It not necessary that you found someone physically.. ahaha,I am giving the founder of dating sites a SPECIAL THANKS and HONOR..true love is not Just a little commitment Two pe
Read more