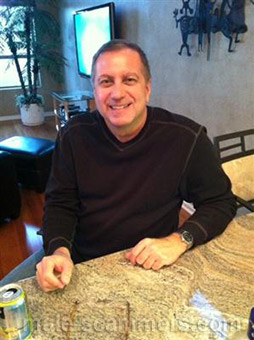 REPORT N1 (added on March, 11, 2015)
Patty (USA)
I met him on Chemistry. Seemed like a great guy. Very attentive. Very romantic. He said he was unable to meet as he was leaving on a business trip to South Africa for several weeks. Called everyday to talk. Said all the right things. :) He claimed he was widowed 7 years ago, had a son, David, aged 20, studying in the UK. Recently moved to Houston area on contract with an Oil and Gas company. He said he was an engineer (geo-technical) and did Certified Construction Management on oil rigs, over water bridges and mine reclamation. After a few weeks, he asked if I could help him get iTunes cards for his son since he was out of the country and unable to figure out how to get the cards in the US. hmmm Then, he asked if I could purchase and ship an iPad to him to replace one he had promised a colleague. He explained that his luggage had been lost by the airline. Eventually he asked if I wanted to help him with a diamond deal since he didn't have enough money to close the deal. After some pressure, he confessed he was a fraud, apologized and tried to explain. I was unable to find anything on him on Google, tried a reverse phone search and ran a background check. No info. He tried to explain it away by saying he had been a victim of identity theft.

Romance scam letter(s) from Alex Fitzgerald to Patty (USA)
I honestly want to say thanks for the interest to communicate more with me am enjoying the vibes. It will take more than a book to describe one's self and I bet you will agree that it's hard.. But here is an exclusive; if at my age I do not know what to say and when to say it, then what would I be? Unwise!!! When a wise man sees he has probably spent more than half his time in life already, he begins to assess his main goals in life. What could be more important than a happy end? Comprehensively I'm an easy going and optimistic human who loves making the best of everything that life offers. Yeah.. I have old fashioned values as I am sure am not from these times just like you lol but I have no choice but to embrace what comes with the times, like internet dating for example.

I strongly believe after all life has to offer we all need to live our remaining days with fullness of joy and happiness. No matter our achievements, there is no replacement for a partner to c
Read more