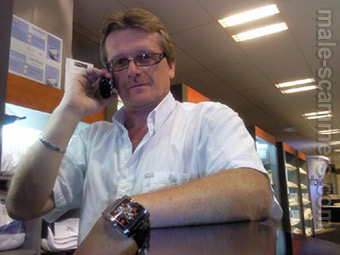 REPORT N1 (added on February, 26, 2015)
Elisa (Finland)
This man contacted me on sight matc.com. Soon he wanted to continue on Skype. He was an USA army doctor located in Kabul, soon to get retired. His wife had died for 4 years ago and he had a daughter, who was 13 years, by name Nicole. He wanted to find a wife now. His profile was registered in Holland, he told this was because his friend who made the sight was from Holland. He told his father was German and mother american, but he came from Hoquiam, Washington in the States.He worked on this for a long time and very much, hours a day, before he found out an story to make me to pay him money. He would send me some of his property before he came here. At this time there was another man, delivery agent, in the story. This agent sent me his id card with picture so I would know him when he came. he wanted me to send a copy of my passport by e-mail, which I did not. So i have pictures of twoo men, telefonenumbers and adress to a bank in England.This delivery agent wanted me to pay him money, because he could not get paggage out from the customs in England.
He had a profile on match by name max0s9a, registered in Holland.
He has a skype-adress: maxschmitz50. (I still have him as a contact in my Skype. He does not know that i found out that he is economical criminal.)
His "delivery agent" demanding money, 1800 pounds, phoned me on 19.02.2015. The other number is polish as the name on the count where they wanted me to put money on. You?ll see the bank on delivery agents e-mail.
Very similar contacts have been taken on match chat. yesterday by two men with Italian profile. They began their story in exactly same way as this one. One was "american" and the other one "Canadian". So it looks like there is a group that is interested in finish profiles just now and use exactly the same method.
REPORT N2 (added on October, 5, 2018)
Eloha (USA)
Scammer who wanted to met me on tagged.
REPORT N3 (added on July, 2, 2019)
Carol (USA)
I received a friend request from a person going by Chris Allen. He said he was a Capitain for a company called Blue Blue Funnel Freight Lines. He told me he was a widower with a son living in the UK with a teacher. We were suppose to meet but couldn't get the ship cause his employer didn't send the plane. He then stated he had a package in London which was then sent to Ghana and he wanted me to send money to get it sent to me. Then it just started getting he needed more money, more excuses why he couldn't co.e back to the states. Now he is supposedly in prison in Barcelona, Spain for spy/terrorism. Stupid me believed him and just wanted to get him home and sent him money, itune cards and iphones. I also want who is using this man's picture caught and hopefully get my money back.

I hope you are doing well and also have slept well for me as I did. I thank you so much for letting me know more about you and your past too. I'm missing and thinking of you my dear and you have been on my mind and thoughts all this while my dear and my feelings for seems to be stronger as I just cannot stop thinking of you and being together with you. I think we have told each other more about ourselves and its been such a great pleasure to share a lot with you this way , I really appreciate it. It seems like we have a lot in common and looking for the same in a relationship. LOL You're such a great and a nice woman and I really admire that.

Although we've never met, I feel as if I know you well. I knew from the start that there was something special about you; you've touched my heart and wouldn't let go. I'm pretty much a trusting person, for the most part, however. In fact, I try to keep an open mind with everyone.. At least as much as a human
Read more