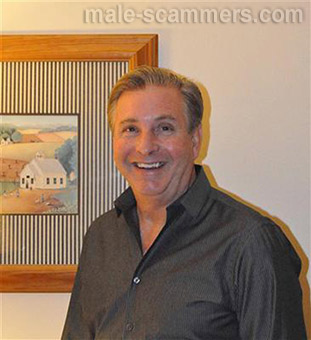 REPORT N1 (added on February, 20, 2015)
Brenda (USA)
THIS INDIVIDUAL CAN CREATE EMOTIONAL DAMAGE, HE IS VERY SKILLED IN MANIPULATION SKILLS, SKILLED AT BREAKING DOWN DEFENSES, HAS THE ABILITY TO MAKE ONE FEEL RESPONSIBLE FOR HIS ISSUES.
He presents himself as an engineer, he states he worked for a company in Texas, and now going out on own. He is buying and selling crude oil. He states he is a widower, raised in foreign country.
Shortly after meeting he indicates he has to go to Manila as he has a shipment of crude oil he must be there to prepare for shipping. He needs to work with Philippine government during count of crude oil barrels. He has purchased 30,000 barrels this is his third deal. He should be gone approximately 2 weeks, asks you to join him.
He goes to Manila, makes frequent contact begins to express love, and future together. He discusses in lieu of coming to Manila meet somewhere romantic and get to know one another.- he talks of Bali etc. He is a very strong emotional manipulator of the individual he is attempting to scam. He likes to communicate thru Yahoo messenger and Vibe. He quickly turns around statements put target on the defensive. He does not contact for 3-4 days then makes contact. He states he has been depressed, as there is another man.
Shortly thereafter he states he is embarrassed, does not want to be seen as failure, yet he attempts to ask for monies as the docks overloaded and he has to pay overage fees.- $ 4500. He does not have monies can you please lend monies. He had taken money orders with him, unable to cash money orders. He indicated he has had prior identity theft therefore his bank will not release monies unless he is present. Therefore money cannot be wired to him. He has an answer for any potential suggestion as to resolution of situation. He wants the women who he loves to lend him the monies. He continues to try and bring down the defenses to send him monies. He tends to call during sleeping hours to fatigue his target. He will call and continue to call every couple of minutes, then leaves a message there is another man. He uses these acquisitions in attempt to produce guilt to send monies. He indicates he can not leave due to owing the monies to dock workers. He states the overage was probably due to the day he did not go to docks one day as he was depressed due to thinking there was another man. He attempts to make target feel guilty this has occurred.
Then he is mugged, they have taken his passport , money orders, computers, brief case. He has $3000 which was hidden, that was all he has left. He has already spent $1500 on one night at his hotel, this is the least expensive room. He has $1500 less and he is going to move to less expensive hotel, which he claims is $ 300 per night.
He has made a deal with dockworkers, give them $ 3000 now and then wire the balance. He asks for the $3000, He refuses to accept no, or do not have monies. He indicates his passport has been found not briefcase, computer, monies or money orders. He continues to ask for monies. There are multiple conversations which start out good, he then begins to turn around words and becomes verbally abusive. Target ends conversation. He contacts several days later apologizes said he is just frustrated depressed. It is very similar to speaking with two separate individuals.
This continues, ,target cuts off contact. Messenger, Vibe uninstalled. He has cell number and now begins to text. He begs forgiveness, asks please put Messenger/Vibe back on. He begin to email, he is sweet and loving, Then he divulges an inheritance. He wants its sent to your home. Asks target to speak to diplomat to provide information relative to shipping of trunks. This individual texts on non official stationary with misspelling and inappropriate case. He then reassures this is all legal, there is 7 million in cash in these trunks, it is inheritance from grandfather, it is safe as money has black dye, and can be removed.
This individual changes his scam, and uses emotional techniques to guilt target. He cuts off contact then comes back all loving.
This continued for about 6 weeks, I continued with him, totally aware of his scam in hopes of distracting him and perhaps avoids him from scamming another.
He is now attempting Wash Wash scam, he has this individual contacting me on behalf Jack Mcool.
REPORT N2 (added on August, 18, 2017)
Eloha (USA)
Scammer.

Romance scam letter(s) from Jack Mcoll to Brenda (USA)
Good morning my Queen , smiles
I am sending a little sunshine to brighten up your day, spreading seeds of joy for you along the way, Hope this day starts out fine for you in every way, hope there's always sunshine to chase stormy clouds away...
Lets chat when you're awake
Thinking of you

Thanks for the lovely note about yourself, Your email gave me a bit insight of the kind of person you are and believe me The more you tell me about yourself the more i find myself thinking about you, I have been on the site now for about three months, But i didn't have much luck, most women i met on the site were after a one night stand Which i am not into, You and i seem to be on the same page cause i sense that you are looking for the last love of your life, However i am in manila, Philippines now , i got here safety i thank God , well i used to work for a petroleum company in Dallas TX as a Contract Engineer and i resigned after I've earned En
Read more

Romance scam letter(s) from Jack Mcoll to Eloha (USA)
Hi pretty, you got a heartwarming smile:) I am Andreas from Croydon, what qualities do you need in a man??? lets see if am qualified to be your Mr. Right