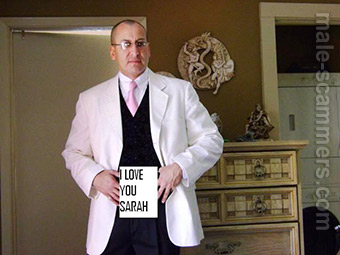 REPORT N1 (added on October, 17, 2014)
Linda (USA)
He ask for money he has to boxs of money in the uk storage and he in the miltary in Iraq also he email a form to put my information and western Union $7000.
REPORT N2 (added on February, 19, 2015)
Sarah (England)
I received a friend request from a David smith and was curious as I new a David smith years ago. When I accepted his request He claimed to be an E6 staff sergeant in the us army. The 1st conversation was light and friendly no issues at that time; however the 2nd time he started calling me sweatheart... He first claimed to be 47. He avoided direct answers to all my queries of his work and what he was doing there. I know the U.S. Air Force had bases there during the 1st world war but not army. I became suspicious and asked for his contact details. He gave me a mobile number and personal email. I then asked more direct questions. He did not answer and had quite a hissy fit when I mentioned that I had told my daughter of him, claiming he had breached protocols and his work was need to know etc. At this point I asked him for his U.S. army email and other formal us contact details. He refused and again gave me his personal details. I asked him for a picture with my name printed on a piece of paper; talk about photoshopped. He finally asked me for ?100.00 when I said I couldn't afford it he lowered it to ?70.00 then ?50.00at which point I had my own hissy fit. He has been chatting for a couple of days and has asked if I have a credit card( I don't) and is once more asking for cash, apparently no amount is too small. All this has taken 10 days. I have now blockedhim on F/B and have not paid him a penny but thought others should be aware.
REPORT N3 (added on May, 22, 2015)
Helen (UK)
He sent me a friend request on Facebook, first, he was in Afghanistan, and was from Texas, then he says he is in Ghana, an E6 staff sergeant. We talked a bit on Facebook messenger then he was on yahoo messenger as kingarmy21, and after that, he was matawilliams106 on yahoo messenger. I got suspicious when in amongst the sweet talking he asked me for 2000 us dollars for a ticket to come home and he was very persistent, and that same day, he also said that it was 2820 us dollars, he even wanted me to get a loan that he would pay back when he came home to me. Then he asked for a phone, and he wanted an iPhone, or an HTC phone, and it had to be sent to a diplomat! ! I am stringing him along to see how much more information I can get on him. I was even proposed to, and he is now saying that he needs 300 us dollars for food stuffs as tthe food is not good for his body. He has 11 profiles on Facebook and has even sent me photos of himself in uniform, and on it, it says mata. I have got 2 addresses for 2 different diplomats in Ghana. I asked him for an APO or FPO address, and he said we don't have those things here. He also says that he can't access his bank account! ! and can't communicate outside of the country, because of being on peacekeeping mission! ! ! My mother used to say that if it's too good to be true it normally is. I hope that these male scammers get their comeuppance, and I believe that they will get their own karma.
REPORT N4 (added on June, 19, 2015)
Marina (England)
He asks you to set up a Yahoo messenger and the told me he was being posted to lybia and asked for care package he later said he needed money because he needed medical treatment that he could not get from the army later he he asked for more money for food because the army food was not very nice.
REPORT N5 (added on September, 25, 2015)
Loretta (USA)
Been talking on line for a month now. He befriended me as Thomas Owens but is David Smith. Told me he was in Afghanistan serving a mission. he had asked for 200.00 money to send to his mom and son who live in Africa, said could not get no money from his accounts due to where he was. He also asked for a phone cause his had broken after we had talked for a while, i being dumb did send one but had it shut off and canceled before it arrived! he had told me he would come home to me if i had contacted his General and filled out paperwork and said there would be a fee i would have to pay! He talked real sweet every day sent me pictures of him in uniform and after shower pics. nice looking but damn scammer! be careful.

Romance scam letter(s) from David Smith to Linda (USA)
Thanks for accepting me,you are such a beautiful woman and i will love to know more about you...How are you doing?

My Beautiful and Lovely Angel...

There is so much I want to tell you, a lot has been running through my head lately. I'm having trouble putting my thoughts into words so you will have to bare with me through this.I keep thinking about the future, about life, and what I want out of it. I keep thinking about us and what this relationship means to me. I keep thinking about these things and I realize they go hand in hand. This relationship is my future; it's what I want out of life. I want to grow old with you. I want to experience this crazy love forever and ever, and I really think I'm going to get to. I want us to walk through new houses picking the one that would be just right for us. I want to see you walk around our house in a big t-shirt with your hair down and catch me staring at how gorgeous you are. I want you to pull the
Read more