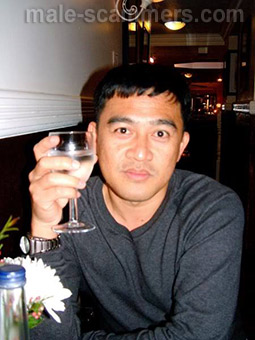 REPORT N1 (added on January, 7, 2015)
Dorothy (Singapore)
When I was getting very skeptical about the Mark Bill that I have befriended in facebook, I happened to have another friend frequest from somone who looks ok to me. He said he was looking for a relattionship but I told him I would not mind us be best friends since I have an ongoing relationship with Mark Bill.
I told him about Mark Bill more and more each day and he always advised me to break up the relationship because he believes that Mark Bill is a scammer who wants to get all my money till I die.
When Mark Bill went missing for about 2 weeks, I was very sad and turned to Sunny to tell my problems. He told me that he wanted me from the day he met me and would like me to reconsider a relationship with him and forget about Mark Bill. I thought I should accept so that I can quickly forget about Mark Bill.
During one of our chats on facebook, the account was suddenly closed and I could not carry on the chats. Within minutes he called to wish me good morning again. I questioned as to why he greet me again when we were just chatting earlier on. He told me he could not go into his facebook and it seems that his facebook has been spammed. So we chatted through Viber since then.
But one day, he called for emergency help to ask me send money to a herbal doctor who is waiting for the money urgently befoire can send the herbs to his aging and sick mother. He said that he could not do the money transfer that day because he is in class and will pay me the money the next day but till now he kept quiet about the returning my money.
He was planning for us to get married as soon as he complete his study in real estate in the UK in February. I questioned about his relatives and I found that hiis maternal uncles are not in Singapore but in the US, but earlier on he said they are in Singapore.
Recently, he said he wanted my approval for him to invest in business with his friend, Moses, who is studying with him in the UK. His friend invested in an oil shipment business and has been making lots of money. He even got his friend to talk to me, who asked me to promise not to hurt him as he loves Sunny very much. But Sunny did not want to talk to me after that because he said he feels very emotional every time he talks to me. The following day, he asked me for my personal particulars because he wants to put my name for insurance purpose on the business. I advised him to write his mother's name as she is his closest next-of-kin. But he insisted he wanted me to be the beneficiary or else it will cost a lot to transfer names later on I was skeptical so I asked him to send me a copy of the documents before I can give him my details.
Last Monday, when he was chatting with me on Viber, suddenly I could not send my chats anymore, I emailed to him and he replied to ask me to call him on a new number or his facebook because he lost his phone. But when I went to facebook, I realised the chats are on the same account which was earlier on supposed to be hacked and spammed though the name is Peter Steve instead of Sunny Ng Lee. At about the same time, a lady emailed to me an alert that she is a weekend girlfriend to Mark Bill or Carly and told me that he is a Nigerian who stays in Penang and his having a good time. She told me to be wenaware of the skinny Sunny. She said she will leave Mark Bill because she realised that they are hardcore criminals who will kill.
But till now she will not tell me where they stay. I am wondering if she is actually Mark Bill who his outdoing his friend in crime, Sunny Ng. Or may be Sunny Ng or Sunny Wong Sunn or Peter Steve are the same Mark Bill or whatever his rreal name is. But both sound so different through Viber.