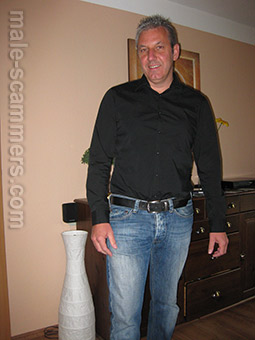 Romance scam letter(s) from Anthony Edelson to Marsha (USA)
Hello Marsha, I am glad to hear from you. I can see you really had a long busy day.I guess you are tired now,do you for care for a massage? lol. I also had a long busy day on the site, but its fun working here because its new experience working here. Anyway i just woke up to talk to you. its 1.27am here.

Hello Marsha,missing you so much. I hope you are fine. Yesterday i told you i was going to send you my pictures. Attached are my pictures hope you will like them .lol. Reply me with yours too. Take care .

Hello my love,missing you so so so so much.I hope you are fine,I woke up today smiling as I recall our relationship because I know that years from now, I will still be waking up smiling for the same reason every morning.
A warm "hello" doesn't come from the lips, it comes from the heart doesn't have to be told, it has to be shown doesn't have to be given, it has to be sent.lol. Someday, you will find one who
Read more

I hope you are doing good now and having a pleasant time now. Thanks for your contact from the Match and i can see that we both have met on fate and i am taking this opportunity to tell you something about me as we are both behind the screen trying to know more about each other.

Well, I have been widowed for some years now and i think approximately 8 years. My work as a Staff sergeant always keeps me busy, till a got a invite to join that dating website Match and i happen to find you. Am a very responsible man, I just don't need a woman but a serious relationship that i can find myself into,am very open minded person and i like to laugh and i like experiencing new things. I have a 14 years old son, his name is Jason ,he is dear to my heart and my source of joy and when i meet the right woman then he is also going to be my everything and also dear to my heart and am going to treat that right woman with so much respect and dignity and
Read more

Romance scam letter(s) from Anthony Edelson to Sue (USA)
Hello Pretty,This is John Wilson from MATCH.COM. How are you doing . It was nice meeting you and thanks for giving me the chance to have you personal email address to write you here . Well as i told you on the site am single And lonely father looking for Someone that i can continue the life with no matter how the distance is because distance doesn't matter when love finds itself and i believe distance is just a mile and it can be closed within a twinkle of an eye by two hearts that have accepted to be together...I need right woman to spend the rest of my life with .. I'm not getting younger so i need a woman to share my happiness with. That's why I'm here, so if you do not mind let know more of each other and see what the future hold or us. Hope to hear back from you soon. stay bless

Good morning -
Good morning my dear how are you doing and how was your night? i hope you really enjoy your night...my dear i just wake up this mor
Read more

Romance scam letter(s) from Anthony Edelson to Eloha (USA)
morris is my name i am 53 of age male with one kid ...am devoced and i went my ture love who i will spend the rest of my life with am very honest and respectful man thank you for hearing me i wish i will hear form you soon you can also mail me morristay37@yahoo.com...5'8 feet tall and athletic and I was born in Ghana and raised in Usa my religion is a Christian,never mind about me been a Christian so let us see what the future would hold for me and u i study accounting and i just completed my education and had master degree in accounting

ok, i thank you for your maximum ,matured understanding for providing me your email address. I will send you an email message la
Read more