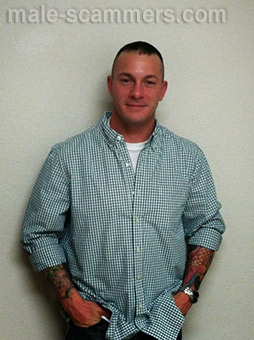 REPORT N1 (added on December, 19, 2014)
Thea (Netherlands)
New scammer.
REPORT N2 (added on May, 14, 2020)
Fernanda (USA)
He sent a friends request on Fitbit and I accepted and we chatted a few times there. He said he was a single dad whose wife has died of cancer. He said he had a thirteen year old daughter. Then he asked if I had a Google Hangouts account where it would be easier to chat because he wasn't on Fitbit as often. When we started chatting on Hangouts he started to express that he was having feelings for me and that he loved me. Then he said he wanted me to me a mother to his daughter. Which I thought was strange. Then he started saying that his daughter's birthday was coming and he couldn't get her a gift and he just wanted her to be happy. He felt bad that he was away and she would be alone on her birthday. He pleaded for me to understand as a mother. I am a sucker for children, so I said I would try to send her a little gift. I asked what she liked and he told me she liked games and if I could get her a $200 iTunes card or an Amazon card. I let him know I could not afford that much. I told him that I could maybe afford $50. He gave her my Hangouts email and she text me as well. She texted me starting with " Hi mum, my dad said you are going to be my new mum." I found very odd. I texted back that I wouldn't be her new mom but I could be a friend.
I fell for it and bought a $50 Amazon card. I texted her to ask for an address that I could send the card to. She told me to just take photos of the front and back of it. Which I did. Two days later Ryan texted me and told me the card was not good, there was no money on it. I told him that was impossible. He tried to get me to get an other card. Which I refused to do. Then he ask if I could get him a $200 Amazon card so he could contact his superiors so he could try and get leave to get back home because his daughter had an accident the night of her birthday. Sure enough I received a text from someone saying it was the daughters nanny telling about an accident and that Holly ( daughter) had a bad injury and needed money ($600) to treat her. That's when I started to do some digging of my own. And found some of the same photos on your site. I dug some more on my own and found the real Ryan Christopher Sweesy's obituary. He was 40 years old and died October 26,2019.

We come across your request for the permission for obtaining the military family and friends form and the information with benefits that associated with it.

To obtain a army family and friends form.

*Your full name and location must be provided.
*There is a particular amount of money that men or women who have a partner in the military should buy the form.US$500 *You will be required pay the money to any locations around the world where our zonal offices are located for deployments.
*The form shall be send you after 5mins of confirming your payment.
*You will be required to fill the required information's on the form,with the full information and your true relationship with the officer.

INFOMATIONS AND ELIGIBILITY OF OBTAINING A MILITARY FAMILY AND FRIENDS FORM