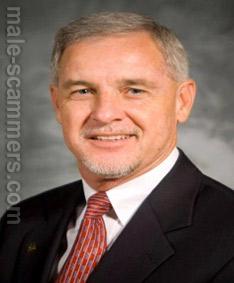 REPORT N1 (added on December, 5, 2014)
Louise (USA)
This scammer first contacted me by sending me a message from Facebook. I replied to him and then we started communication per private email. attached are a number of messages from him. He wrote me everyday most of the time the messages were sent between 3-5am U.S time. He was a very good writer and was very romantic in expressing himself. He claimed to have one daughter who was in school and he had been a widower for seven years. He claimed to be new to internet dating but said he chose to do so because his work kept him to busy to go out and meet anyone.One red flag that first caught my eye was in his introduction from Face book he said he was from the US, I wondered why would he say that if he really was in and from the US. also some of the phrases he used were not what is normally used for someone who lived here, but he told me he was raised in Mexico and had been in the U.S for 25 years. He also claimed to be a citizen. I found it odd also that he would not accept a friend request from me for face book, his face book page looked sterile to me, no family only one picture of himself and no friends, later I found that as a big red flag. It did however confirm he was from Austin Texas and was an architect. I did searches for him also on goggled and white pages his exact name never would show up. I also looked up architects in the state of Texas and found nothing. He first claimed to be an architect living in Austin Texas. After about 3 weeks of emailing each other he tells me that he has to go to Doha Qatar to complete a job. It was after he supposedly made the trip and only then he contacted me via phone even though I had given him my number and asked him to call me. I don't think he ever was actually in the united states. About three weeks after the trip he set up messages to make the move to ask me for money. He was nearing completing the job and lost his wallet, then he asked me to send him $1500 to last until his next check from the job. This was only going to be the beginning, I believe if I had sent him the money it would not have stopped there I am thankful that I listen to my inner spirit, and children and did not send him any money. in one of his letters he asked me not to tell anyone about us until our relationship had bloomed. Ladies fair warning if something doesn't feel right and someone tell you that, it is best to find someone you trust to tell most likely than not he is running a game on you. When we want so much to find that special one we become vulnerable and sometime blinded to what the truth is. I kept asking myself how is it this man can love me so much and we have never even met in person? As the days went by and I continued to read his letters I focused more on maybe this is true love than what the truth was. I have attached some of the letters, but there were many more.

Romance scam letter(s) from Eric P. Jose to Louise (USA)
Hi How are you doing?I hope you are doing great? I checked on you I sincerely appreciate your looks, I believe you don't mind us knowing each other.My Name is Eric from USA. It will be wonderful of you to send me a feedback if you want us to get along,I promise to make you happy and bring the best of love out of you! Thanks

Dear Louise, Thanks for responding back to me for telling me about your self and your life style. Have you dated online before? Tell me how your are doing and If you have met some other guy online before, it is new to me and I want to know what your opinion is. The very reason I am interested in establishing a friendship with you is because I feel I have a lot to offer you in the way of a friendship.I know I have a lot to share with you that will be of interest to you and even some things that will surprise you. I am very much a man of substance and I am very unique in today's society because I live my life through my spirit
Read more