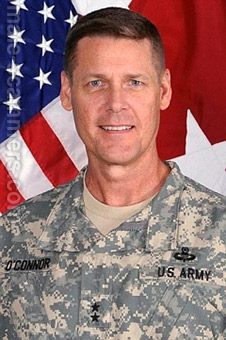 REPORT N1 (added on November, 17, 2014)
Bente (Denmark)
I was contacted by Eric Smith through the datingsite "Badoo". As this is my third report of a dating scammer, I was from the first mail in no doubt it was a scammer - again.
I did not doubt, because he first announced his name was Eric Smith, but the pictures he sent me was the name O'connor on the uniform. I asked why and he stated he also named O'Connor.
The next thing he informed me, was that he had his late father's house in Copenhagen, but the address he informed me it was the largest city hall in Denmark: the Copenhagen City Hall. Later, I asked again about the address, now I was told a completely different address that does not exist in Denmark.
Eric Smith asked all the time for my income, and since I have my own business, he asked all the time to the profits I asked why he was so interested and he stated it was because I was not allowed to be deceived by my customers.
Something else that revealed that he wasn't in the US Army in Afghanistan was that when I had seen something on television and told him what I had seen, he knew nothing about what I was talking about.
He informed me he had received a reward, gold rings for our wedding, diamond earrings for me a gold plate with his name etc. all something, the poor people of Afghanistan had collected in to him because he had helped them. The reward was worth $ 330,000. He would send it back to me. A diplomat to travel to Denmark to hand it to me. I only had the money for travel expenses etc.
The diplomat stated he had expenses for 7000 Euros as he should have when he handed the package to me, I said okay when I have the package in my hand and have seen what it contains, I would pay. But of course he ran out of money when he had brought a very little money. Then he lacked suddenly 4500 Euros, a place he was in transit I informed the same procedure unless he expected I sent the money, I should have documented information regarding tickets, customs etc.
I received a fake document, which I unfortunately have deleted .
It was at this point I told Eric Smith that I had "played" with him, and I from day one had been aware of what he was, but had just been waiting for the time when he would ask me for money. I informed him that I was aware that the pictures he sent me were false and I knew They Belong To Maj- Gen. John O'Connor.
I never heard from Eric Smth again.

I believe either of us had in mind of meeting someone special online but it has just come to pass with our personality description towards learning few thing about each other.I'm ready to falling in love with someone special who ever that happens to be.. there are few qualities which talks about genuine woman in relationship,such as faithfulness,loyalty, trustworthy,Honesty,respectful etc.
I guess having those qualities in relationship can really help a lot. I am not looking to fill a void in my life,I am looking for my soul mate.I consider myself a very easy going person,even tempered.

I love to cook and a perfect evening would be to decide on a wonderful menu and cook together while enjoying a fine glass of red wine and great music. I enjoy many type of music from easy listening jazz to classical to country western especially Ian Tyson.I love to have adventures, large or small, and am looking for someone to share them with.I look into the futur
Read more