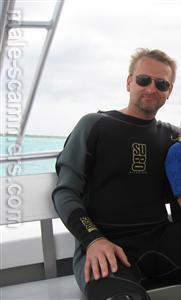 REPORT N1 (added on October, 28, 2014)
Ida (South Africa)
I was contacted by this person months ago. He SAID HE WAS A DIVING INTRUCTOR AND A ENGINEER. I have received e-mails almost on a daily basis and he tells me how much he loves me. Don't know whether this was by coincidence but he so happens to have a daughter with the same name as I have being my middle name Sophia. He is now on a oil rig and also has a contract coming up in Angola. He says he wants to marry me and that he needs a partner in his business and that he has sent me these documents and that I must complete the one and then later on he will need my banking details as money must go into that account.. I have not seen him in the flesh only in the photos he sent me. I have spoken with him telephonically and his accent is not that of a white male. It sounds like maybe Nigerian or Angolan. I am not too sure if because I have already sent you 5 scammers that I caught out that I am getting too paranoid. Please help me with this one as I don't want to lose him if I am wrong, but also don't want to be caught in a scam.
REPORT N2 (added on October, 26, 2016)
Helena (South Africa)
I MET DERICK RANDOLL A MONTH AGO ON SINGLES TO MEET, HE TOLD ME HE IS FROM CAPE TOWN AND HIS DAUGHTERS NAME IS SOFIA, SHE IS A STUDENT, TOLD ME HE DOES UNDERWATER WELDING FOR OIL COMPANIES. 2 WEEKS AGO HE WENT TO THE UK ON A CONTRACT. LAST WEEK HIS DAUGHTER SEND ME AN WHATSUP MESSAGE THAT SHE HAD AN ACCIDENT WITH HER DADS CAR A BMW AND THE GUYS WANTS HER TO PAY. DERICK PHONED ME AND ASK ME TO PAY THE GUY AND HE WILL REFUND ME, TOLD ME HE LOVES ME AND IAM THE LOVE OF HIS LIFE AND GOING TO MARRY ME, SAME STORY AS WHAT I READ FROM IDA AND HE GOT A CONTRACT IN ANGOLA, AND WANTS TO MAKE ME HIS BUSINESS PARTNER.
WHAT A FOOL I HAVE BEEN, NOW I READ ON YOUR SCAMMERS WEBSITE ABOUT THE OTHER LADY HE MADE THE SAME PROMES. HE SHOULD BE CAUGHT WITH HIS DAUGHTER AND JAILED.

Romance scam letter(s) from Derrick Randoll to Ida (South Africa)
As sleep seems to evade me somewhat...and all i think about is you ..i decided to write..
you have brought meaning to my life, .awakened feelings i thought were gone, and lost..
to know that someone out there loves you , and wants to spend their life with you , is the most wondrous feeling one can have...to feel wanted and appreciated, these little things mean so much...we have come a long way love...we have trust and honesty between us which is so important,,,and we deserve some happiness in our lives...

When we met, i never thought that i would ever love or trust again...but you showed me differently...
you unlocked my heart,and accepted me for me...as i have accepted you ..we are not perfect, but...we are perfect for each other...we have much in common, and willing to share our lives with each other..our thoughts,our dreams, our ideas...to reach heights we thought we never could...
and with the prospect of meeting you soon, warms my heart, to meet this ge
Read more