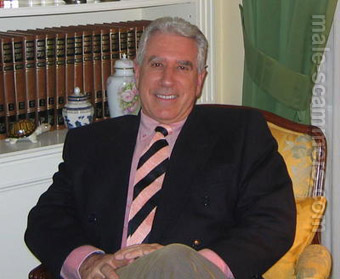 REPORT N1 (added on January, 19, 2012)
Sharon (USA)
He was on SeniorPeopleMeet - dating site. After talking on messenger 3 or 4 times he says he's in love with you. He has a 20 year old daughter in nursing school - he says he divorced his wife 8 years ago and his daughter lives with him. Sent many pictures of himself and some of his daughter. Says he resides in Miami - went to Italy because uncle died - flew to Ghana with his cousin (one way ticket)to collect 3 chests of gold his uncle left him in his will. When he got there he found that his bank had put a hold on his account because of a large withdrawal and he had to appear in person at the bank to get his account released. They don't have enough money for tickets home (cousin to Italy and him to Miami). But he says they got the gold and had it shipped to the U.S. He becomes sick and in the hospital for a couple of days, and when released says he's still so sick. Somehow he gets the ticket money, then says he needs $5,000 each before they will let him leave the country! Sends an immigration document proving this. This document is on the U.S. Embassy site in Ghana - its a fake. I thought he was being scammed, but in actuality the people he contacted in the states for money were scammed.
REPORT N2 (added on April, 28, 2015)
Sharon (USA)
We met on okcupid. we talked for a a week then we got off the site and started talking through yahoo messenger. after about a month he got a contract in Malyasia to build a condo. while in Malaysia his bank froze his account, he got sick and was in hospital. He did ask for money after a while and i did send him $1,600. after sending him this money so he can get his plane ticket home.....he got into an accident on a bus with his worker and his wife and he was in a coma and his workers wife needed a operation so his co worker spent that $1,600 so his wife can have the surgery to save her life. Now he needs another $1,600 so he can get home. he had a friend wire me money to my bank account but wells fargo told me it was fraudulent and they closed my account. after 4 months trying to get money he had a friend western union me money then i send it to his attorney's sec. Charity (do not have her last name or the reciepts anymore).

How are you doing today and how did your night go and did you sleep well??.. How is your day so far and what are you doing today??.. How is Jenifer and the kids doing today too and how is Mamma feeling now dear??.. I am fine over here and everything is fine here also and Sandy is doing good also darling.. We went to the embassy today and we got our passports with the visas in it and my cousin wanted us to get our flights booked and be able to fly today but I can do that just like that without telling you about it so I told her I have somethings to do on here and someone to talk to before leaving to that country so we got our tickets and We will be flying tomorrow 11:30Am from here.. I have prayed about this all night and need you to pray about it for me too.. I just got back and it's 4:00Pm now over here and I want to get some rest so I can be able to get on tonight and talk to you sweetie. I want you to know that I have been thinking about you and
Read more