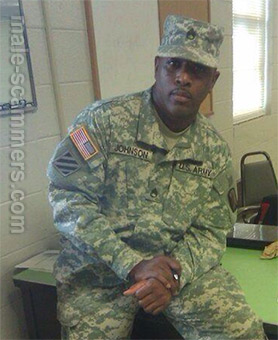 REPORT N1 (added on October, 16, 2014)
Cindy (USA)
This person first contacted me on free black dates and then went on to facebook, and as of now we are still communicating through emails and messenger. Just this minute did I find he was a scammer. He hasn't asked for any thing yet. He told me his name SFC James Johnson 3rd Infantry Division on active duty in Afghanistan. Retiring in 4 weeks time. He lives in Tampa FL and has a daughter named Mary. He is very eloquent in the way he writes to you,doesn't use scammer language. I can tell now that he is scammer because he losing patience with the conversation. He gets upset when I ask him specific questions. I have all our conversations from email and messenger. I had almost got scammed before so I followed my instinct which was true. He just posted a new profile on Tagged October 8, 2014. Maybe you can get ahead of him this time. Thank for this site it saved me again.
REPORT N2 (added on February, 11, 2019)
Yvonne (USA)
I was contact by Alex Johnson(James Johnson) through POF. We started communicating through Hangout. He told be that he was a Sargent in the Army and was stationed in Iraq. and He was going to retire in July 2017. He told me that he had a daughter name Mary and she was in Ghana staying with some of his friends. He wanted me to send money to her for birthday. Also, he stated that he found a bag of gold and wanted to send it to me for safe keeping. However, in order to get the gold out of the country, he would need 500.00 to do so. He said that he needed me to send the money so the government of Ghana would think that the gold belong to me and that his friend would send to me once the paperwork has been done on it. Foolishness overtook my better judgement and I sent the money. Then he said that in order to send it to me, it would be 3,000. I told him that I don't have that kind of money. Then he stated that his daughter was sick with Maleria and need money for the hospital bills. I told him that that should be covered because of his military benefits. He said that because she was in another country, the benefits was null and void. I did not send him the money. He would stop communicating with me for a while and then would come back and try to smooth things over and get back in my good graces. I have learned and very valuable lesson one I will not soon forget.

Romance scam letter(s) from James Johnson to Cindy (USA)
I'm looking for someone who has more or less the same likes and dislikes as me. Someone who can appreciate the finer, nicer things in life, yet also pull off a conversation about world news, but I've learnt that sometimes what you want isn't always what's good for you and that you can't really choose who you fall in love with. I like a woman who's not afraid to speak her mind, but still has enough respect for others, to know when not to. I want to meet someone who's honest and nice, and passionate about something, be it life or work or love or anything frankly. Someone who gets how important love, family & friends are. Someone who believes in happily ever afters and who won't try to change who you are, but rather contribute to whom you might become. A friend, a confidante, a lover and a soul mate. Someone you can quietly read the paper with on a rainy Sunday morning and spend hours blabbering to on a crazy night out. Someone who'll laugh with me if i want to dance i
Read more