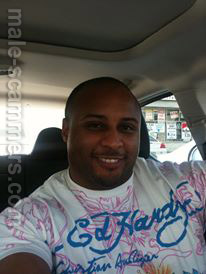 REPORT N1 (added on October, 9, 2014)
Candy (USA)
We met on dating site profile name Johnson03/Judemark01 and we got talking, building up interest. He told me that he was travelling from USA to South Africa for work. I fell in love with him so much.Told me he was send parcel in advance with some of his luggage to make him lighter when travelling and sending a few gifts for me. Few days i received a call from a lady supposedly from South Africa that i had a parcel and needed to pay clearance for it. I must have been blinded with love for this man as i went ahead to send money via western union to her. Funny enough the parcel did not come because the next thing was there was a huge sum of money in the parcel and they would not release. He told me he was on a plane to RSA and the next thing was he arrived in Dubai, connecting flights but lost his passport. Few days later, asked me for to process express papers for his travel as he would reimburse me once in RSA. I sent this money via western union. Next thing was he was delayed in India on route to RSA as the persons who processed his papers gave him fake. Then it really dawned on me that i had been duped!! I was blinded by love, i lost $9700...

Romance scam letter(s) from Mark Johnson to Candy (USA)
I AM SHOCKED BEYOND WORDS!!! Why have you been lying to me??? The pic is from Metrodate site as a 'new member'. You are now ROBERTWELL, NOW 49 YEARS OLD NOT 44, YOU ARE NOW WIDOWED NOT DIVORCED AND NOW A GENERAL CONTRACTOR MULTINATIONAL NOT SALES AND MARKETING MANAGER!!!!!! Is this what you do? Cheat innocent women?
That is cruel! I now dont think the pics are yours at all!
WHY??? Please just send me the money i have sent to you in trying to help coz i have realized all this farce...

Yes, Thanks for telling me what you have in mind? I will send you all the money back. You do not have to worry your self? Now you are saying what you like to me lying to you for what i am not ready, To beg you for anything?
That is what am saying to you tell how much i need to send to u. I will send it back to you women in Africa they are like that you are not going to be the first one?
Your money will be send back again tell me how much