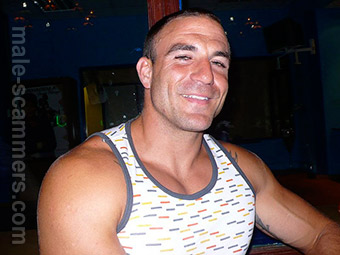 REPORT N1 (added on September, 15, 2014)
Joyce (Netherlands)
Robert send me a direct message on the Soulmates site, asked me right away to leave the dating site and get in touch via Yahoo Messenger, because he removed his profile too within a day or two. He said he was on a secret mission in Afghanistan and platoon leader as well as part of the Military Police there. Within a day he asked me to deliver a package with "stuffs" as he called it, for the orphans and for his birthday (the list grew longer and longer) and he said it could picked up with a carrier from which I got an e-mail address (miltarycarrier.us005@live.com). He asked me to send the email to the carrier to make sure the package could be picked up, while we were on messenger and was very persistent i did. When I did I got an instant reply from someone called Prince, who constructed sentences much the way Rob/Robert did.
I found out that the messages he sent me via messenger and email were cut and paste from different romantic sites and some showed up on your site too. it was all about trust, love and inspirational quotes.
I got suspicious right away and confronted him.. He denied everything and said he was deeply deeply hurt. He was only able to get online at night (Amsterdam time), while he was in Afghanistan. He told me he had two months before he was going to retire and was referring to himself as my husband and was making plans to fly straight out of Kandahar to the Netherlands to spend the rest of his life with me.
REPORT N2 (added on September, 2, 2015)
Baba (USA)
On match as i_believe396; Goodfavor272; LivingSmile4Ever; SpecialWiner38 I know him as Bruce McClane. Stationed in Kabul Afghanistan. In Camp Garbrines which doesn't exist. Neither does Bruce McClane. He conned a computer out of me along with some clothing and food and $800. Our relationship lasted for three months. He is very good at sweet talking. Also makes you feel badly for him being in the desert and on patrol every night. Told me he was wounded. Told me there was an explosion on his FOB killing two of his men. Needed the computer to transfer his personal documents to for his future business. Would pay me back. Needed the $800 for shipping from GHANA!! That is where he truly is located.

Romance scam letter(s) from Robert Larry to Joyce (Netherlands)
I'm heading for patrol and thought of giving you some reading material for the day. lol I may have told you some of this already, so forgive me if I repeat myself....
Just want you to know more about me and am looking forward to meet you person.. I am very outgoing, I love most activities outdoors and a few indoors as well ;).. I would also like to say, I am single as you already know. I am somehow conservative, but am adventurous and love doing things on my own free will (dont like to be forced or pressured).. Relaxing,I listen to wide-range of good music (country, pop,soul, r&b,rap) just to mention a few.. I watch movies with comic,romance,adventure and of cos action packed.. I'm down to earth, open-minded,never hide how i feel when it comes to the matters of the heart.. I don't have any kids as you already know, I don't smoke or drink alcohol... I'm always smiling and don't easily get irritated, not the quick tempered type..I like sharing even the little that I
Read more

Romance scam letter(s) from Robert Larry to Baba (USA)
How are you and how was your night? I hope you get this email reaches you in good faith Cathy, it was very nice meeting and talking to you on the site, I hope we can give ourselves the chance to get to know each other better and see how far things work out for us. I really like your attitude and your given nature. I am ready to relocate if things goes well for us It will be very nice to explore with you and have some wonderful time together .. I am that easy going type, adventurous, romantic, ambitious and have a very good sense of humor. My hobbies are to mentioned a few sports, watching movies, going for walks, listening to music (almost all types of music), love on the beach, dancing in the dark...I am very outgoing, and I love most activities outdoors. I am cute, and I would also like to say, I am somewhat conservative, but am adventurous, listen to wide-range of music, watch good and romantic movies, taking walks along the beach or curling up in front of a fire
Read more