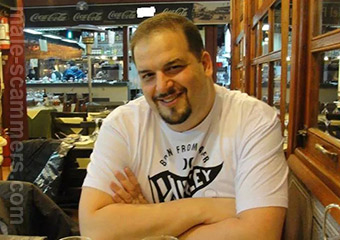 REPORT N1 (added on August, 27, 2014)
Fani (Canada)
I meet him on the twoo site was the first time for my with no experent and he approach me and he told me he is not have account with the site and to move to Facebook and we did that was on February some time and everything was good for around 2 months one day he told me he have some job to do in Germany he was self employe and something to do with wire communication and after he live to Germany after short time he ask me to help him with 2600? because his cutting machine broke and he can't finish the job and he put all the capital on and he can't lose the money and I send to him that was the first mistake I make in my life always he found the reason to ask for money and always he was seeing if he don't finish the job he can't send the money back to me and he continue until he empty all my saving and even I borrow money from my credit line thinking on my mind if he don't resolve the problem I lose all the money and in the end but was to late I ask him to send a pic because I don't trust him anymore I ask him to write on the napkin my name and to hold that and make the pic and he refuse to do that but was to late because I send him 40.000 dollars I was so stupid to go for something like that I I have fake document he send to me I like to send that I want this guy to be on this site I don't want someone alls to get in his hands I think he is Nigeria and the money I send in 2 names one on his and the second is Yassine Yamine.
REPORT N2 (added on August, 25, 2015)
Susan (UK)
Introduced himself on Twoo but after a couple of messages suggested Facebook as easier to message. His first message on Twoo was a typical scammer message saying he viewed my profile and wanted to know me better with a view to becoming a couple. On Facebook he told me he was Canadian, widowed with a 17yr old daughter called Juliet. He had been widowed about 8yrs. Lived in Battersea London for 19 years, and had no contact with his family in Canada. I was suspicious from the start as he English was not good but I just played him along knowing that eventually he would reveal himself. He then had to go to Germany on business, which was cables and wires, and after a couple of days he asked for money. Actually it was quite a small amount for a scammer it was ?700. He needed to hire a truck so he said. I refused as I don't have any money or savings. He said he would try somewhere else for help. During our time on Facebook I had a friends request from someone called Corine Baussart, her and mark where friends. She wanted to introduce me to her business which was loans, I'm not sure if the two are connected but it does seem a bit dodgy. I blocked her. On his Facebook profile he has no friends shown, so you cannot ask anyone how they know him. I tried googling his comp as nothing and I looked at several scammer pages nothing, but I knew he was one. Then a friend suggested googling his phone number and hey presto up he appeared on this site. I hope he doesn't scam anyone else as I see some poor woman lost loads of money last year.