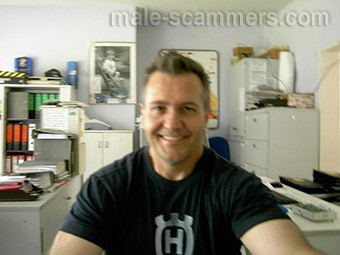 REPORT N1 (added on July, 15, 2014)
Marianne (Norway)
I met this man at be2 in January this year. He lived in Cleveland USA, with his daughter Sally on 9 , his wife dayed in an operation 5 yers ago. Sinse then his mum took care of his daughter wail he was working. He was home in the states waiting to travel to Quatar where he worked for the moment. He was an engineer and worked in the oil sector. He would like to meet me in Norway when he went to Aberdeen in February for a job, and would go over to meet me after that.
From the start I did not want to continue the conversation, when I did not want my love from the United States, its to far away. I was trying fooled before. But he persuaded me, and was an incredibly lovable and loving man. I made ??no suspicion. He talked very good English and I soon found out that he was American. From February until today I spoke with him daily on the phone and we've probably sent 1,000 texts betwen usof these months.
When he came to Aberdeen (He also sent me a copy of the ticket he had ordered to Norway) lost his bank cards, did not know they were stolen but reported it. When it started, I helped him with 1,000 gbp for him to come to London and arrange this. He sent me the link to the account of Cilibank USA with passcodes, he had enough money to pay me back. But the incidents continued. He had to declare equipments on the seaport. (came from Germany) It was always something happening, ship to his company had left the dock. The workers who had to wait to start the job, etc.He had a wonderful way of speaking, so be careful. Spent a lot of my love, my darling, sweety.
Sworn by his daughter's life.I continued to send money to help, I never doubted that he would pay me back when everything was arranged. My father died during this period, and he supported me all the time with phone calls and text messages. I still can not believe that he could fail me but eventually he did. I am now in a difficult financial situation, have been helped by family.
I hope that you girls out there reading this, and bee careful of this incredibly charming man. His voice, and he a beautiful laugh. I fell in love with the voice, words and laughter. He loves soccer and is a ManU fan.

Thanks very much for telling me about yourself. I'm really pleased meeting you and i look forward to meeting you in person in the near future. Yes, you older than me, but i can't remember age being a criteria for relationship. You are a pretty lady and i will love that we have a good relationship together.
Time here is just almost 11am and i see it's almost 5pm there. I hope your day has been great and you having a very relaxed weekend. Since your kids are all grown up, does it mean you live alone? Are your grand kids from your daughter and your son? What are the names of your kids?
I see you've been divorced for a while, have you had any relationship since then? How long have you been on the dating site? Have you met anyone before me?
I will be leaving for work in Qatar tomorrow, so i have a little more preparation to before leaving. I will be in Qatar for 3 weeks before i leave for Scotland and i will make arrangement to come visit you in Norwa
Read more