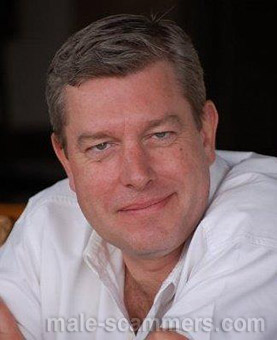 REPORT N1 (added on July, 14, 2014)
Jessica (USA)
Hi,
I have been corresponding with this man for almost a little over 4 months now. He initiated the conversation on Facebook messenger. He claims that he is a wealthy man from California and had to go to the Benin Republic for business, he was shipping a large shipment of books for the deaf . He claimed to have spent 9 million dollars to get these books shipped. And that he paid it all from his own pocket in agreement with the publishers. He told me that he was divorced, that his wife cheated on him with his lawyer and took off with all his money leaving him with nothing. So bankrupt and in the streets. That all his friends and family turned against him. And nobody would help him. He finally, was able to get on his feet and make this fortune and now he is about to make an even bigger profit out of shipping all those books to Benin. He told me he was traveling for a couple of weeks to complete the deal and then he will come home to see me. He said he has a daughter and she's all he has. And he bought her a house in NH. She even chatted with me a few times to confirm her dad's story.
He has been in Benin now since we have started writing and he is in deep need for money. He is not able to access his bank account from Benin for security reasons. And will have to activate it back when he returns to the USA. Therefore I am the only person that can help him with funds (he calls it). I have been sending him small amounts of money thru money gram, thinking I am helping an American citizen in a bad situation. But every time I think this is it, he comes up with yet another problem that he has encountered and needs more money.
We discussed him going to the American embassy for help so he can return and he claims that he had to go through a court session and they allowed him to try to provide half the price for his plane ticket to return to the USA plus half the money he would owe the US government in taxes and a license for having shipped all those books.
So far I have sent him $2500 and he still needs another $2000 in order to be able to come home.
I should have checked male scammers earlier and notified you but I was foolish enough to believe him and too much in love with this handsome man to believe that it was a scam.
I do believe that someone stole his ID from Facebook and is using it for this scam. I think I found pictures of the persons behind the pretty picture of this American man who is probably either dead, or not using his Facebook account anymore and has no idea that someone is using his pictures and his name for this scam.
REPORT N2 (added on July, 29, 2015)
Antoinette (USA)
I can continue with the story line of where Jessica left off. I was in contact with Allen from 5/4/14 until 7/1/15. During this period of time, I sent him over $15,000 (even took out a loan for $3,000) to help pay for medical expenses after he claimed that he was hospitalized after a taxi cab accident in Lagos (9/14). The money I sent him was supposed used to pay for hotel, food, bribes to officials, hospital and medical, legal/attorney's fees and of course for travel expenses. When I offered to pay for his one-way ticket home to Los Angeles, he declined by saying that credit is not used in Benin/Nigeria. Money was sent via Moneygram and Western Union to Adediji Oladayo Adalano until December and then to Allen after that. We met on Facebook after he introduced himself as a friend of one of my best friends. After I contacted the US Consulate in Lagos, they confirmed that there was no one by that name with a valid US passport.