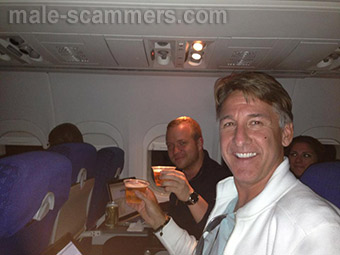 Thank you for accepting ME!! Sweetness, I want you to know that since the day we started this special relationship I've fallen deeply in love with you. There are no words to express the gratitude I feel in my heart that you came into my life, and how you make every day so special. You are my life, my heart, my soul. You are my best friend, my one true love, my one and only. I love you more today than I did yesterday, and I'll love you more tomorrow than I do today. I hope you're feeling much better now? I wish to rest in ur arms too.

I've been trying to find a way to express my feelings for you. I’ve always wanted to create something unique to show you just how much I love you. Now I’ve found the right place, and I’m going to tell the world that I LOVE YOU! It may sound crazy and corny, but I want to tell the whole universe about the true and sincere affection I have for you. I cannot tell you exactly how I feel, but I hope that you feel the wa
Read more

Romance scam letter(s) from Lincoln Harrison to Ann (USA)
I was on facebook.com but i can't remember my log-in details because the last time i log-in was 3 years ago, I have attached pictures of My Mom, Sister, My Daughter and my self. I would love to see yours too.

Romance scam letter(s) from Lincoln Harrison to Ni Ni (Australia)
hello there. how are you? how is life treating you over there? i am new here and do not know how this forum operate. i hope and pray that my messages gets to you, my name is Robert, i live alone and i am single as well, i have a daughter who lives away from home, her name is Lucy as time goes on you will get to know more about her. like i said, i am new here and i find this forum very boring, reading a message from you will give me more courage and faith that i would find the right partner over here, i am a simple man who loves to live a simple life and also wants a simple woman in his life, a better communication always help to build a standard relationship of friendship, this i would like you and i to have towards us getting to know each other more better, i do not feel too comfortable sharing more of my personal information on this forum, because i do not trust this forum too well, i will feel comfortable doing that outside of this forum, i hope you understand wh
Read more