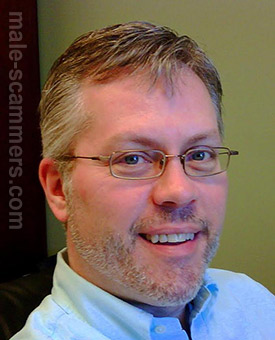 REPORT N1 (added on July, 7, 2014)
Sally (UK)
This man was on Match he gave me his email address and an Yahoo Instant Messaging contact, he proclaimed his affection and love within a few days and has asked me twice for money. The first time he asked if I would donate to his favourite African charity. The second time he has asked for ?500 to pay his lawyer to send a document as his ATM card was not working. He wanted me to transfer the money by Western Union.
REPORT N2 (added on November, 20, 2015)
Theresa (UK)
This man is dangerous. He hangs around dating sites like E harmony. He looks very handsome on his photos but looks totally different in the flesh. He took over twelve thousands pounds from me by claiming he needed money for equipment, hotel bills , and I nearly lost more money. Luckily the bank stepped in and stopped the money. He is romantic, claims he is shy asks you to get married. He totally steps into your life so you feel you can't do without him. This man looks like his profile on this website but when he is introduced to you by the way of photographs he looks different . he looks like another scammer that goes by the name of Mark S Fisher. Lewis looks different on a webcam. I questioned the difference but by then I had fallen for him and lost my money. I have reported the scam to the police. Don't fall for his charms, When you talk to him you will hear all kinds of background noises. Don't be fooled into thinking he's in a hole or at home. He has mobile phones going off all the time and he will tell you his friend Patrick is calling... don't be fooled either about his so called son who wants his old dad to get married or the story about the wife going off with the best friend. Avoid at all costs and go to the police.
REPORT N3 (added on December, 8, 2017)
Eloha (USA)
Scammer who wanted to meet me on Tagged - image stolen from US neurologist.
REPORT N4 (added on September, 25, 2019)
Dobby (USA)
Hamilton Jeff is a single father of a son in boarding school. He had two children, but he lost his wife and daughter in a car accident two years ago. He is a doctor, 64, with the military "in the United States nation." He says he is from Germany. He is in Syria now, on a peacekeeping mission with the United Nations and has been there a year and six months, and he has five more months to go He does not get a vacation. . He is seven hours ahead of me. The photo he sent me of an injured soldier was bogus. I did a reverse photo search on it, and it came up as appearing in articles about foreskin restoration! After telling him he would have to do without me a couple of weeks because I was going to the beach, unless he could get leave and go with me, he contacted his commander and gave me the email address to write asking for his leave. They told me it would cost $2,650 and gave me directions for sending the money. The jig is up, buddy! The email will be included with report.
REPORT N5 (added on October, 23, 2019)
Leslie (USA)
this is carls's pof profile:
carlrst: looking for serious love
About
Non-Smoker with Average body type
City Atlanta, Georgia
Details 60 year old Male, 6'1
REPORT N6 (added on October, 19, 2020)
Francis (Germany)
"With all honesty, I am looking for a very serious long term relationship without any head games. I know how to treat a real woman that is not into playing head games. I have to with all honesty I'm not into playing games. I am very honest, loyal, faithful, trusting, kind, caring, loving and fun adventure, with a compassionate and generous nature. I don't play games with a person's heart or their feelings or emotions. I am a very ambitious and intelligent man. I also have a wonderful attitude about life. I have a wonderful sense of humor. I can easily find humor in most situations. I love to travel, explore new things, catch a movie, or read a book, I love to listen to a variety of music, I enjoy sharing a meaningful, intimate conversation with my partner. I believe in communication, honesty, trust and respect are very important in any relationship. I am a very romantic, affectionate, sensuous and very passionate man.
Am looking for true woman that will be caring, faithful, loyal, truthful, loving, goals achiever, honest, confidential, understands the ups and downs of life, committed to relationship, reader, visionary, conservative, passionate, romantic, sexy and loving. Looking for a true love and long lasting relationship."

Romance scam letter(s) from Mark S. Fisher to Sally (UK)
Good morning Sally
Good to hear from you,Your profile sounds Intriguing and I really like how you described yourself, and feel that we do share similar interests and desires... I am as excited about finding someone who has great qualities ,who is willing to build a healthy loving relationship. I just joined the site few weeks ago and am hoping to meet that special woman ,who will bring back smiles to my life.

Anyway a little about me,I'm a private engineer am into real Estates,designing and building of ware house for private companies and individuals. I have been doing this for the past 10 years. I have been divorced for the past 4 years now,i moved to UK after my divorce.I have a son who is 14 . UK is a lovely place,love the food,the culture as well,they are very friendly.I have had some rough past relationship during the past and i pray i never experience that ever again.That is why now it is so important to me to find the right person. I want to fall in love
Read more

To the attention of:

Hello
Mrs.Dobby Thanks for your message we well received your message in our mailbox, We earlier received a letter from your husband General Hamilton Jeff with a service code number RA14694587 that you are going to write to us concerning his early retirement,