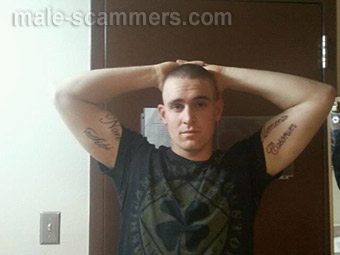 REPORT N1 (added on June, 30, 2014)
Alison (Australia)
I met joe online 4th months ago at a Dating Website call fdating we sent messages to other for 1 week-5/6 messages until he ask me if I had a Facebook Account that I was using I gave him my facebook Address we started chating online. He told me he was a Sgt working for Us Army in Jordan (Jan 2014) Us Army Base and I couldnt get in contact with him on phone because my Mobile phone number wasnt registered to US Army. Only hes relatives can get in contact with him on phone (Relatives phone numbers registered in US Army to make incoming call for him-US Army Security Measures-Soldiers Overseas Deployment). He told me about hes family he had a mother who was born in Sydney Australia but she now lives in Colorado Denver with her daughter, older brother-age 48-married 4 kids-Denver city (Business Consultant) & younger sister age 32 married 1 kid (works Insurance Firm).
After 3 weeks of chatting with him FB online he started to declare hes love for me which I thought was strange!! About 2/3 months later he wanted to visited me in Australia but he couldnt afford the Flight Airfare so he ask me for some help to pay for hes airfare From Jordon to Australia.
Here are some Proof of Evidence of a Conversation between me & Joe C Sage-Dating Scammer about helping him with the Airfare
REPORT N2 (added on September, 23, 2014)
Lucy (Germany)
Dating Scammer Leonard Sage comes from Texas USA he is a Widowee with one Daughter call Jennifer-8 years old that lives with the Nanny at home. He's Wife died in a car accident couple years ago and he has no parents!! We started chatting online at Yahoo Messenger and then Facebook April 2014-August 2014. He was working for the US Army in Libya and then he got transfer to Nigeria where there is a Army base. After 2 months he asking for money for part of a airfare to come and see me in Berlin 500 Euro I sent the money to Nigeria by Western Union. He also sent me a email with a Fake Emirates Boarding Pass Ticket he was going to see me in 2nd August 2014 but he diden't arrive due to the insurance fees were not fully paid.

We would like you to confirm if this information's are correct and to confirm if you the host for Sgt. Joe Casey Sage and he his coming to meet you.

Do get back to as soon as you can,so as we can begin the process on time.

We will keep you inform as the leave process is proceeding.