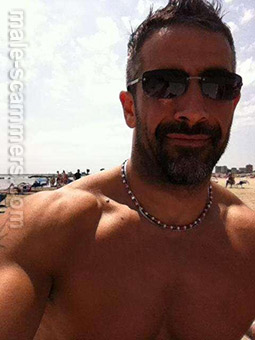 REPORT N1 (added on June, 17, 2014)
Tamianne (USA)
He was in my daily matches on Match. I responded because he his profile was complete and he was attractive to me. i sent him a wink. He responded with a message.
Our relationship developed rather fast. In the first 72 hours we had emailed several times and he sent me his phone number and asked that we correspond outside of Match (red flag always). He sent me very romantic letters and texts. Our relationship lasted one week and two days when he asked me for money.
I was aware that he could be a potential scammer. He wrote very well and made very few spelling or grammatical errors. On the 4th day, I told him that I thought he was trying to scam me. He acted all hurt and called my phone and did everything he could to make me believe he was REAL.. He said he was born in the states, but grew up in Italy. That his wife died in a car accident 8 years ago and he moved back to the states to be with his only child and grand kids. He said his parents were dead, that his mother and father met in the hospital after his father was injured at a construction site...how they got back to Italy was never explained. He did not answer my questions about his past. My red flags were:
1. he claimed to be American born, but basically he was foreign (spoke with an accent). 2) He was self-employed--no company name; also he said he had a graduate degree in Architecture. He said he couldn't get an architect job here so he went into the lucrative Gems business. He was planning to retire in a couple years and spend his time in Mexico at a hotel he supposedly owned. 3) He professed his love and asked me to tell him that I loved him early on. 4) He promised to marry me and I had never asked for this. 5) asked about the property I owned in another state under the guise of seeing what my retirement plans were. 6) I begged him to meet me before he left the country on a supposed business trip and he made a date and then at the last minute had to cancel because of a client. On the last day of our relationship, he texted me and told me he was in trouble with the Singapore Authorities, he sent me two docs (official looking) which basically accused him of illegal business practices. Said they confiscated all his money 228K and gems (tanzanite and diamonds). That he needed some financial support from me and I told him to rot in jail. He tried to shame me and accused me of insulting him. Haven't heard another word.

Romance scam letter(s) from Jose Antonio to Tamianne (USA)
hi Tamianne, this is jose, let me know if you get this.

you're very beautiful woman Tamianne, thanks for sharing the pics, i adore you!

Hello Tamianne
You’re on my mind in this night. There is so much for the two of us to share — a life full of questions and a world full of answers. we've known very few about each other after reading each others profile and exchanging a few messages, but I thought I’d try to add a bit more. Integrity means a lot to me. Like I said before, I tend to gravitate towards strong-minded, open-hearted people who know what they want from life and what they can give to the world.
I’m wanting to know more about the fun side of your life--can you enjoy simple silliness on occasion? I can tell you that I love things like taking a walk on a warm summer night and running under the nearest sprinkler or having a snowball fight by an outdoor hot tub in the winter. Are you a dreamer? Do you like to think o
Read more