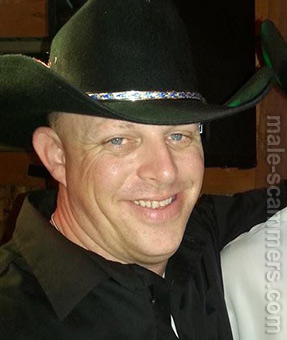 REPORT N1 (added on June, 13, 2014)
Tracie (USA)
Bruce contacted me on the How About We site and again I knew he was a scammer but wanted to catch him in a lie so I could report him to the site. He has not hit me up for money or anything but I saw his photo on this site so figured I would share. I have reported him to the site but they do nothing but block the profile. Bruce has me been communicating with me telling me he is serving overseas right now. From Germany and he wants to retire here in the USA and his wife is dead and he has 2 kids. Same old story. He never gives me answers to my questions but after I ask a few times he will answer them. He is already madly in love with me and cannot stop thinking about me and we have only communicated a few times. Same old bull shit. I now he is not legit when this morning I noticed an e-mail from him and he told me nothing about the troops who were killed there when last week he was quick to send me a line about it. If he was there and he was sending me a message he would have noted it.
REPORT N2 (added on July, 1, 2014)
Nancy (USA)
This person contacted me on HowAboutWe, an AARP dating site in the beginning of May this year (2014). He told me he was born in Germany, had a military career, at the moment deployed in Afghanistan as a Sergeant Major with NATO. He is a widow with two children, a daughter in medical school (18yrs) and a son in military school (15yrs). He says he wants to retire soon and buy a house in Florida, where we all could live happily ever after.
First of all: I am 14 yrs older than him! I know I'm still good looking as for my age; but why would a handsome young soldier want to spend the rest of his life with me. When it is too good to be true, it's not true.
Second: He claims he does not have an APO address, no military e-mail, cannot do Skype because HE IS ON A VERY SECRET MISSION! Those that are on a secret mission do not tell that to a person they just met online! (I have a family member who is in Afghanistan with the UN and are in contact daily with their families). He can only contact his children by e-mail.
Third: He claims he speaks eight languages - two of them being Spanish and MEXICAN! - I write to him in German and he answers with what I guess is a phrase from Google translation, I write to him in Spanish and get no answer.
Fourth: His English is not very good (after doing a Master in Liverpool, UK). But he is very good in citing other writers love poems and such. Fifth: After a month of corresponding (without any personal contact) he is in love with me and wants to spend the rest of his life with me because I'm the one he's been waiting for!!!! WE will buy a house in Florida and live happily ever after! Since the 14th of June he hasn't written to me.... maybe because I asked too many questions????

Romance scam letter(s) from Bruce Masters to Tracie (USA)
How are you? Thanks for sharing your email with me. I hope we can always keep in touch with each other better from here. Hope to hear from you. Do have a great weekend.

Good afternoon to you. How are you today? Thanks for keeping in touch. Good to hear about the graduation of your Godson Eric, and it's nice to hear you had a big party at their house. More I would like you to know about me. My name is Bruce Masters, I was born and brought up in Germany. My both parents are from Germany and they are both late. I was born of the 29th of November 1963. I joined German soldier in 1989 immediately after my University degree 3 years later I went for my masters in War studies through study leave in University of Liverpool. I was attached with the United Nation Army Department immediately after my masters. I'm now a Sergeant Major. It’s my 24 years in service now and I have been able to serve in 15 countries in the
Read more

Romance scam letter(s) from Bruce Masters to Nancy (USA)
How are you? Thanks for sharing your email with me and for your concern about the loss of my wife. Yeah you are right right is very hard sometimes, but we've to try all our possible best to make the best out of it. My daughter is 18 years and my son is 15 years. There was a little delay, before my late wife could conceive. That was a very long long story and I believe with time, I will tell you more about that. How is your kids and grand kids doing, hope they are all doing pretty okay? This does not bother me. I would like to always keep in touch with you from here. I really want to take my time to get it along with you. Hope to hear from you again. Do have a great weekend with you.

Good afternoon to you. How are you today? Thanks for keeping in touch and for telling me more about you. More I would like you to know about me. My name is Bruce Masters, I was born and brought up in Germany. My both parents are
Read more