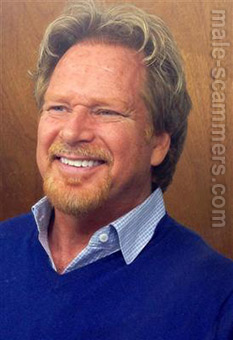 REPORT N1 (added on May, 29, 2014)
Linda (Canada)
He contacted me on 50 plus. Wrote or texted every day with escalating romance, poems,me cards, roses, etc. sudden trip to set up a oil plant on Midway Atoll. Needed cash to get equipment out of port. $7500 told him I didn't have that. Questioned him about cash access and every suggestion wouldn't work. I said that sounded strange. Any way, I said that I might be able to come up with $1000.
To wrap up the story, he texted me at 2 am on Friday May 23, asking if there was any way I could send him $2000. I told him I couldn't talk and for him to send me an email with all the details. I got the "I love you" email with no request for money, but I received a text mid day of the 23rd asking about the money. I answered that I could not get him that money. He started to go about what was he going to do, etc. I told him to pack up and go home. Figured that would be the last I heard from him. But yesterday, May 24, I received a Text saying how much he missed me and how he hurts inside. And hopes I am having a good day. I answered( shouldn't have, but was mad) I told him that I couldn't believe him because a real man would never ask a woman he professes to love for money and that I don't think he is real. He replied that he couldn't believe that I was saying that to him after all this while, but he understands. So I said, well if he was real, I would see the person in the photos in June ( when I go to Toronto) but that I seriously doubt that he exists. I haven't heard back since, but he is quite persistent so you never know.
I had noticed that his facebook acct has an email address for a Richard Kallistos and I found that name in a list of known scammers. He signed one of his emails as Rich and never answered me when I questioned that. I also have been doing some searching my self. He told me he was from Vancouver and I have been there, so I told him I had been to Stanley Park and Butchart Gardens. He said, Really ? but anyone who truly lived in Vancouver would know that Butchart Gardens are in Victoria, not Vancouver. I checked on where he said he lived (the Cambie district) and the High school on his facebook is in that district and there is a Roberto Rodriguez who lives in that area of Vancouver at 2111 Qualicum Drive. So he did his homework, but not quite perfectly. I was a bit suspicious after the feelings escalated so quickly, but played along, part of me hoping that maybe I was just too cynical. Turns out I was right to be suspicious.

Romance scam letter(s) from Roberto Rodriguez to Linda (Canada)
Hi Linda,
I am pleased to read from you this morning, i am truly sorry to hear about your loss, i know how difficult it could be at times, it could have been a bit helpful to have you last child at home with you for the last 5years but when they are all out of the house, it reminds you just how much you need some one special to share your time with, it's exactly the same for me, it's pretty harder that i don't get to see my son and his family as much as i would love to because they live in the US.

I also agree with you, life is short and we should make the most of it when we can, i didn't just want to rush into a relationship after my wife passed, i didn't take a decision to wait this longer either. I wanted to feel good about moving on, to have the desire and urge to love and be loved again, there is no better time than now. I enjoy the outdoors activities, i also golf but i am just as terrible so i guess we both have to get better at the same time, perhaps we
Read more