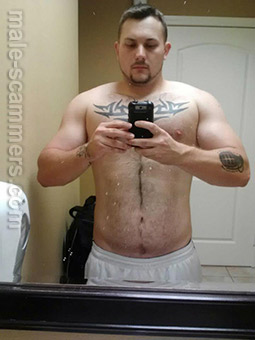 REPORT N1 (added on May, 26, 2014)
Beryl (UK)
Met him on Badoo, chatted more on whatsap, became facebook friends, he had a very sad story about his wife dying and I even became friends with his wife's sister on facebook (her photo is on your woman scammers site). Very convincing and very professional due to the facebook pages confirming what they had told me. After going to America, He ended up in Nigeria apparently trying to sort out his mothers business after she too had died and then needed money for a flight as his cards not working!!
At this point I realised it was a scam and within minutes of me telling them that I had been very stupid they had delted or blocked me but I know their profiles are still on facebook.
REPORT N2 (added on June, 26, 2014)
Elizabeth (Canada)
Thats another one of his profiles on facebook.