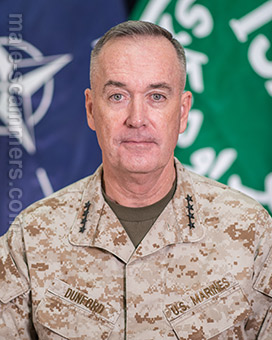 Romance scam letter(s) from Joseph Dunford to Nadia (USA)
Hello Nadia how are you doing today well let me introduce my self my name General Joseph Dunford am a General in the US Army i was born and brought up in Boston US but currently serving in Kabul Afghanistan due to the nature of my job that's why am here i have 3 adult children who are adults now and they take care of their self 2 boys and a girl..

Well i have been divorced for sometime now and lonely soon i will retire from the Army before i retire i need someone to call my own someone i will be with and spend the rest of my life with hope you understand that's why i had to come to Skype to see if i can meet someone that's how i met you my dear..

Now that i have you i want you to know that am ready to build a strong and healthy relationship with you do tell me are you ready for it? if you are do let me know okay for I'm ready my dear i just want you to know my intentions towards you and why i had to send you a friend request on Skype well do have a nice and l
Read more

Romance scam letter(s) from Joseph Dunford to Cristina (USA)
my father have told me a lot of nice things about you, that is why i ask him to allow me to communicate through email, i hope you will write me often from now, my mom died 4 years ago from cancer disease, i feel terrible sad and devastated but i have put everything behind me now, my father help me a lot in those moment, he is always there for me even there in Syria, he is always in contact with me to know how I'm doing everyday, i love my father so much, i am glad you both meet, you seem kind and nice person, i am happy for you both,

this is my schedules

7am- wake up, get ready to class
7:30am- dining hall. breakfast sandwich or waffle or bagel. there's a bunch of other stuff but these are my favorites. we have really good food actually,
8am- class. sometimes i have this free like on Thursdays and can sleep in
9am- class. dissecting weird stuffs
10am- class. integrating stuff
11am- class. pondering the meaning of life
12pm- dining hall. eat. gossip.
Read more

Thank you for writing to United Nation district Afghanistan Kabul.

Your application will be reviewed based on the authenticity of the license / vacation excuse.

We will require the following details to proceed.

Madam I just received a mail from Gen Joseph Dunford that you blocked him it's that right to play games with the UN based on your meeting with him, he is a good man who really love you and want to be with you that why we did everything possible to make sure you meet him but a report came that you blocked him tell us why

We received an email from Gen Joseph Dunford , The Initial amount for the vacation due to the Emergency will be of fee $43,000 to the account details below.