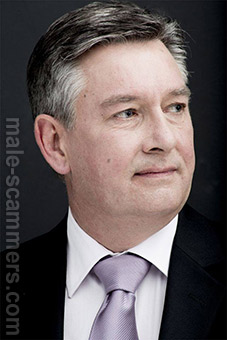 REPORT N1 (added on April, 29, 2014)
Jeanne (USA)
First he add me as his friend in Badoo, and say he is fall in love With me, I Said to him that I Will Never fall in love With a man that I Never see and Know him very well... He trying to let me trust him, from the begining I already Know that he is a scammer and I am trying to follow his game , last week he Said to me that he wants to fly to Malaysia because his father was worked in that Country before , his Story Said This Malaysian Country Owed his father, I am really laughing for this and pretend that I believe in him , my mind Said now the Story Will begin and just last Thursday 24 of April 2014 at 12.02 PM the conversations of scamm begin : that he Said he finished the meeting with Malaysian Government , but his father owed tax, before the Malaysian Government paid him, He must paid the tax for 15% of US 12,500,000.00 = US 1,875,000 and he have only US 1,200,000 and he called his friend to help him but his friend only have 650,000.00 and he still need 25,000.00 , he Asked to send him this money and I Said I don't have money and I Never send money to someone that I Know in internet and I Never see him in life and he Never show his face in camera and camera Also can lie and he said to me that I can leave him and I lack of trust.....wow stupid man... He Think woman in Asia believe in Handsome face come from European.
So I just advise all woman in the World please be aware and not easy to believe.