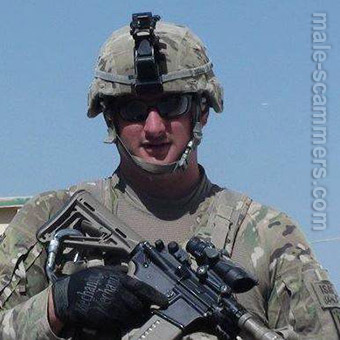 REPORT N1 (added on March, 12, 2014)
Nancy (USA)
I was signed up on the Zoosk site which I have since deactivated and filed a complaint about the user profile Sean4luv.
So this was my first time talking to anyone through this on-line dating site.
This is all the detail that transpired in our conversations.
On January 11, 2014, this person reached out to me on the zoosk site and had a profile set up as Sean4luv from Devens, MA and was telling me they were Sgt. Sean Lawrence, 45, of the 955 Engineer Battalion. Widower for 3.5 years (Jessica) and has a daughter Sarah, 5 yrs old. Currently deployed to Afghanistan with deployment ending in Feb 2014. He has a house in Jacksonville, AR and his mother takes care of his daughter while he is away. He was stationed from Fort Devens, MA - which is where the profile was set up from. He was a firefighter before joining the army and has been in the army for over 12 years - as a mechanic - Attended Army War College in PA, where he met his wife Jessica. He was originally born in Santa Barbara, CA and his mom remarried after his father passed away while he was 7 yrs old. They relocated to Jacksonville, AR. He uses phone # 406-823-0240, yahoo messenger: seanlawrence125 and email: sgtseanlawrence@gmail.com. I questioned him being 45 from those pictures.. he said he gets that a lot and frankly so do I... people always think I'm at least five years younger than I am... so I didn't think twice about that.
REPORT N2 (added on March, 21, 2014)
June (USA)
He is a scammer he is getting money from women and telling them he loves them and they are the only ones for him. He tells everyone hes in Afghanistan, has been telling me hes coming home well it was last month and then its this month and now all of a sudden hes been shot in the line of duty and has stopped speaking to me, after thinking i was helping him get home from war he took my money and invovled his family as well. He is also known as seanlaw on zoosk and sean4luv also on zoosk beware ladies hes a scammer and gets other people involved and gives you a line you cant refuse and makes himself look think the perfect mate.