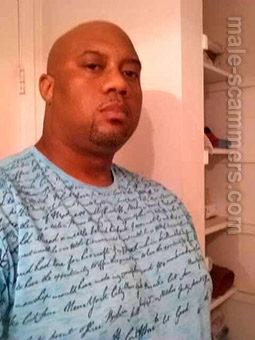 REPORT N1 (added on March, 11, 2014)
Linda (Canada)
I met this man on Christian Cafe. I read his profile and when I googled it, he came up on several dating sites under the same name Kevinclsr. The first contact I didn't find on any sites so I replied to his email. I talked about several things. He responded to me but did not comment on anything I had written. His email appeared odd and somewhat familiar as I have been contacted by a scammer before. The fact that he was an engineer and wanted to keep in contact through yahoo. I googled his second email and it the entire thing, word for word came up. I emailed him back and stated for a man that wasn't into games, he was certainly playing a big one now and I informed him that I found the email on a scammers site. I'm not sure he has read my response yet. I did report him as a scammer on the site but not sure what they do to confirm it as he is still on there. Anybody that can't write their own words is a scammer as far as I'm concerned.

Romance scam letter(s) from Kevin Cramer to Linda (Canada)
Thought it would be rude to walk pass and decided to drop you a few lines to let you know you look radiantly beautiful!! i would like to know you better, do look through my profile and tell me what you think of it,we could get to start off as friends if its ok with you. do tell me are you still single?

Thanks for the reply,you sure do look nice to be called a friend and i am here to look for some one nice and committing to get started as friends with firstly and then finally getting involved in a relationship and settling down if it works out . but i want someone that seeks the same thing i seek cos i am not into games and don't have time for that .. i am an Engineer. i haven't been on this site for so long due to my job cos some times it keeps me busy and gives me very little time to get on here, why don't we get to have a chat segment as i can get yahoo and can still keep communications with you via chat in-case i don't get back on this site
Read more