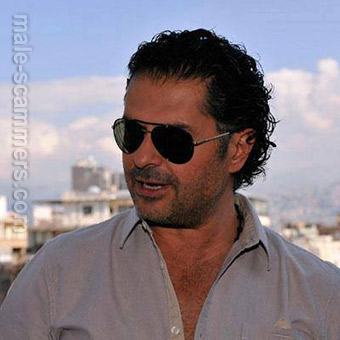 REPORT N1 (added on March, 11, 2014)
Melinda (USA)
Was contacted by Richard Demetrio or Javier Demetrio (which may or may not be his real name), through an online Dating site, he can also be found on facebook email address: richspan@gmail.com and linkdln.com by the name of Richard Demetrio. Says he lived in Manchester, UK at the time I met him, but said his home is in Indiana Indianapolis,USA. He has a 17th year old son living in Alabama. His wife died 5 years ago. Says he is a petrochemical engineer and was employed by Blifinger, a company doing oil rig repairs, but is now self employed. Said he fell on hard times, his home in foreclosure, no income, very ill, no medical insurance, no food or housing, temporarily living with friends.
Says he went to Johannesburg, S Africa for an oil rig repair consulting job, still on the job and waiting to be be paid out millions of dollars in compensation by the S. African Government. Says he fell in love with me and want to marry me. He ask me to open a Bank account for him in the USA in my name for the money to be transferred into. Says he was still in S Africa on the Job but did not have the proper identification to make the wire transfer into a US bank account and his bank accounts in the US were all closed due to financial problems he's been having. He ask me if he could fax me 2 Bank documents for me to sign, me being the beneficiary so he could initiate the money transfer. I received the Bank documents supposedly drawn up by CommerzBank, and very official looking, CommerzBank is one of the largest German Banks with operating offices worldwide. However, when I received the documents, I somehow became suspicious and had them checked by CommerzBank, as it turned out, the documents were fake. I immediately alerted by Bank for suspicious activities and closed the account.
I then traced his IP address to the Netherlands and to Gauteng, S. Africa. When I told him about it,he became furiously upset, but still kept contacting me frequently asking for money to send to him via western union but using other peoples names and addresses in different states to pick up the money for him and then have it send to him. He always wanted to keep never whereabouts secret. Said he needed the money to pay lawyers, doctor and hospital bills, food and housing. Often telling me he had not eaten in days, very ill, could not pay for his medication and no Doctor or Hospital would treat him because of lck of money. Unfortunately for me, I felt stupidly compassionate and he managed to scam me out of $25,000 over time. He emailed me many photo's, photos of Ragheb Alama, a Lebanese Singer and Composer also found on facebook. When I question him about it, he said he looked identical to him. This man, named Richard Demetrio has been using different phone numbers in the USA re-routing them from other countries to the USA. I have at least 5 of them. When I ask him to return the money, he started to threaten my life and to burn my house down, using profanity and foul language on me. Luckily for me, I told him I have kept a copy of all conversations and emails ever exchanged, put it on CDrom and placed it in a Safe Deposit box. I have contacted Chris Hanson at NBC in hope to expose him and do an asset research to perhaps recoup some of my money. I also repoted him to the FBI, Google, Yahoo, Facebook and filed this report to many other Scammers Alert sites.
REPORT N2 (added on February, 14, 2018)
Eloha (USA)
Scammer.