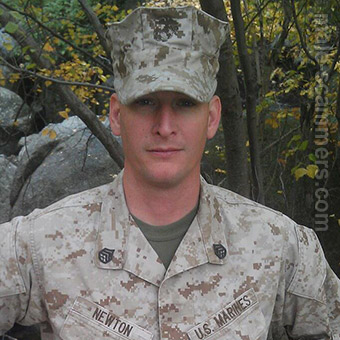 REPORT N1 (added on March, 4, 2014)
Cejie (Philippines)
I'm just a concerned citizen to prevent some innocent people like me to bait on this trick, i do think mr. newton was not aware that he's picture was using by the scammer, the owner of this account was black american, i know this guy from a site, i thought he was real yes at first he's looking for serious relationship in the end, he will ask a money 10,000$, it's good that i dont have that money, i didnt give him any single centavo, he's option was to get a loan for him which i already had a doubt.
i hope you take action on this coz many innocent people like me will might ruined a life because of this trick, you're a marine, i salute it sir i know u do good things for many people, i dont want to think negative about marine guys, he mentioned me that at first jason newton was his cousin, in the end he dont know that he's saying that jason newton was his brother so it is inconsistent. i need to find the truth but the real jason newton was just ignoring me, newton woodside matthew. i did check this email i found a link, i do think this site is fake also just to trick people, i need to investigate more, i found out that newton woodside matthew has a link same as the link of dyunna barnes (kentwood high school, kentwood, louisiana) which was tag on his photo (jason newton other account) so i hope you take an action on this.