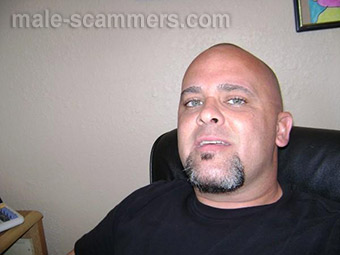 REPORT N1 (added on March, 4, 2014)
Debra (USA)
This guy said he was from Milwaukee, was a widower of 5 years, with a 12-year-old daughter named Clara. Said he's an independent oil drilling contractor for Shell Oil Company, that he studied abroad in Spain, and that he recently sold everything he owned to be able to bid on a contract and is now drilling in the North Sea close to Glasgow, Scotland. Said he has three months til he finishes his contract and then he's coming back to the states to find true love. Said he's made a lot of money and he wants to retire and focus on finding his soul mate.
He has pictures of himself (assuming it's him) with a lovely girl who looks to be around 12 years old. We only exchanged emails for about 3 days. He asked for my mobile number, but I didn't give it to him. He seemed off because he was very flattering and it didn't ring true. I'm very VERY average looking and he was going on and on about how the angels would be ashamed because I was so beautiful in comparison. Red flags all over the place. He also said he's an only child and his parents both died before he was 20 and his family didn't get along with his parents so they have no contact with him. I thought that was a little too convenient because with no family to follow up with, there would be no way to verify who he was. I tried searching for his name on Google to see if he was really an oil drilling contractor. I found an Allen Smith, but he is 31. The guy who was talking to me said his name was Alan J. Smith, and that he was 57. So then I just did a google search for oil contractor and glasgow, scotland, and lo and behold, I found your website. You had the exact same first email posted that he sent me, only on your site, he sent it to someone named Cheryl, and he called himself Allen Trebek. In Cheryl's letter, he said he was 55, had been widowed 3 years and his daughter Clara is 6. I assume he probably sent her photos, too.
I have all the photos he sent me, as well as all the emails, if you want them. I met him on Christian mingle, so as soon as I figured out what was going on, I notified them and provided a link to Cheryl's letter on your website. They contacted me and thanked me and removed him. Of course, he'll probably sign back on under another fake name. But he seems to like Glasgow Scotland as a place to say he's working. Oh,and he told Cheryl he was from Virginia, but he told me he was from Milwaukee, WI. I did not contact him. He contacted me first on Christian Mingle. In fact, I had limited matches to within 50 miles of where I live (in Arkansas), and he had to have browsed to get my name, because we would never have matched up -- Milwaukee is hundreds of miles away.
I do want to say that he did not ask me for money. I'm pretty sure that was coming, but thanks to your site, I stopped the communication before that happened. Please post my report because since he changed some of the information up, I want other women to have all this information. I am sorry to say that I was particularly vulnerable and I believed all the nice things he was saying. I don't believe I would have ever fallen for a request for money -- too many red flags were going off. But he was very convincing, especially when talking about how much he loved his daughter Clara and how sad it was for her to not have her mother anymore. He was very pushy about wanting us to be together, even though we only talked briefly.

Romance scam letter(s) from Alan Smith to Debra (USA)
How are you doing ? My name is Alan , I find your profile interesting and I you to know that you look so beautiful , I must confess if i ever saw an angel it will have to be in your eyes , I'm new at this , please take a tour on my profile and let me know what you think ? really interested in knowing more about you . Anxiously will be waiting to read from you soon . Alan

Thanks for responding back to Debra , I love your name , My name is Alan. I would really love to get to know you more. I know i'm far from AR but i will move to any state if that will be the only way for me to find happiness again in my life . I have a daughter who is 12 years old . I have been widowed for 5 years now. I would like to settle down with a woman now and live a happy life with my family once again. I believe that with God, all things are possible, I believe we can make it work through here although I have never been involved in this online dating before now but
Read more