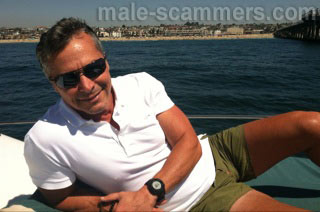 REPORT N1 (added on February, 26, 2014)
Samantha (USA)
The address listed is not his home but a house listed for sale. He will tell you he has it on the market by he is buying or bldg a bigger one. Texas Sheriff's Office confirm he is a fraud. Name Gregory Dean Bergmann, age 51, 52, very handsome Caucasian, with accent. Says it is British but it is not. Story: Widower, wife died 7 years ago of cancer, one son 12, home schooled bc his job takes him all over the world as contractor. Mother British, father German decreased, grew up in London. Moved up as high as he is going to go in company and plans on working from home and settling down. Project Manager of sorts. Will tell you what he thinks you want to hear! Will talk about visiting you. Will say he loves you after only 5 ish emails. May say his best friend met his wife on dating site. Has to go to South Africa to complete the project for 10 days. Stays longer due to issues. Day before he is to return bank draft cannot be cashed. Needs you to help him work out a solution to pay men whom are threatening him bc he promised to pay them in cash. Asks for $4500 to give workers a little til he gets back to Houston. Also says he will give you a little more back, and jokes about it lightly. Ah he has two really good men there and the Rascals are all like family. This guy is good but doesn't talk enough about son Kyle. Background check will reveal man with same name in MO with a son with the same name but 25! Poor guy probably doesn't even know his identity is being used! Uses Tx cell numbers! Very aloof and seems to forget to answer your questions bc he is so busy with work. Even sent me an expensive gift but found out that a fraudulent card was used. Will turn things around on you when you want answers. Blew up my cell. Hell maybe I got to him and he fell for me bc he ended up buying me gift. He called me a few times too. DO NOT GIVE PERSONAL INFORMATION, ADDRESS, PHONE NUMBER, ETC. yes he has mine but I am taking precautions. I was stupid at first but never again, and I never gave him money either...arse! If you call him he won't answer but you will hear him say this is Greg. Don't fall for this act!

Romance scam letter(s) from Gregory Dean Bergmann to Samantha (USA)
Hello Samantha, this is a test email to be sure I have the correct address, kindly get back to me as soon as you get this :)

Thanks for the email and I am glad you did write, I am gonna tell you a little about me.. I really don't know how this is to work.. But I will give it a try... I am very new to this online dating thing..
I suppose you know my name.. lol. I was born to a loving couple, the home of a German man and a British woman. My father was on an international job in England where he met my mom. She says there was something about the man that no woman could ever resist, sometimes she says she sees same in me,lol. During my father's global movement,Its just me and mom most of the time.I did most of my studying in the England but my father died after a brief illness and we were left alone,But my mom was strong for us (my sister and I) and that's why she remains one of my best women. I met my late wife in Paris. she wa
Read more