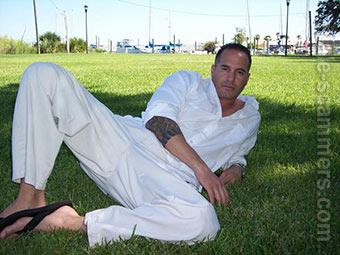 Romance scam letter(s) from David Lopez to Lisa (Sweden)
Hello Lisa.
I feel it important i write a short letter to tell you more about myself and thank you for taking your time to reply my letter to you on the dating experience and also for writing to my personal email address.How are you doing and how did you?i hope everything is going on well with you today, Well i am fine and safe here .i am now living in the capital city of Afghanistan which is Kabul where i am now time over here is now 7:01pm Monday.
I am John Lopez by name, a Sergeant in the U.S.A Army and stationed in Afghanistan for some time now for missions a military personnel.i am a Spanish,i have lived most of my life in the USA, i am an American citizen. i have been blessed with a son, who mean the world to me, his name is Jeff, he is living with his mother.
i am honest, Kind, Caring, Loyal, intelligent and very adaptive and communicative when it comes to conversant conversation about the military and for the peace keeping force in the army i have come
Read more

Just wanted to know how you’re doing. I was imagining what it would be like to wake up every morning seeing your face.I hope you find this letter beneath the sheets when you awake this morning. I know this seems wired to have a letter across distance wish you good morning with alot of love.Pretty I want to spend my all time on you because i wanna know you more,am ready to give you all the attention and devotion a woman requires from a man, and I hope this isnt too forward, but I want to be the only man in your life i hate to share an egg like you with some one else, I see my future in your smile and I am my strongest and my weakest with you, and I hope you will consider spending the rest of your life with me. Well I just finished my daily devotion for today. Hehe. I wanna read the bible with you one day. Just sharing thoughts about how wonderful God has been to me through out my dangerous work for the past years even at war front. I wanna hear y
Read more

Romance scam letter(s) from David Lopez to Erica (Finland)
It's been great meeting someone like you on a first day on online dating site. I am totally new to this and now want to give it a try. I am a honest and a caring man. Have no family now cos I lost both parents in my tendency age. I was brought up by my late aunt in Colorado Springs.... I have a Spanish blood lol. I am an E-6 Staff Sergeant in the U.S Army. Am also under deployment for peace-keeping missions here in Afghanistan Kabul. I have less than two months to retire. I have met only two women In my whole life. All those relationships didn't go well with me. I always lose Cos am really an affectionate lover. I am praying to God for a new gift from this online dating. I would like to get to know more about you. I have never been married and I have served the military for about 23 years now.

Awee come on ,
i dont believe in lies.. i have great values.. my late aunt was my everything .. she proved to me how much sh
Read more

I don't smoke or do drugs,But i like to taste wine or shampaign with good flavor.My favorite colors is blue.

I am seeking to meet some one caring,faithful, communicative, loyal, generous, understanding, future driven, honest, truthful to be with in a long term relationship,Courtship or marriage , Some one with Good life principles to set an example to our children in the near future, God fearing person.

Talking about who i am;am that easy going type, adventurous, romantic, ambitious and have a
Read more

Romance scam letter(s) from David Lopez to David (USA)
Hello David thank you so very much for your respond ...I am very happy to read from you as well....I like traveling as well and i have travel around the world ... as you know i am Robert Lopez native Spanish born in America.......I am one and only child for my parents i was born and grow up in Ft Leavenworth KS in a military family where my mum is a head teacher and dad work in the medical field of the Army and later work with UN......I am now E9 Staff Sargent a leader of my squad working in the senior management of the army currently on my service in Afghanistan but will be back home for good in few weeks time........I relocated to Paradise Texas some years ago after my parents passed away now i left all alone no friends no family have been in a relationship for 12 years but lost my partner 3 years ago to brain cancer ... Everyday work is my priority i was born to serve my country and i love my job even thought is dangerous here but love it and i am always safe....
Read more

Romance scam letter(s) from David Lopez to Judy (USA)
Judy, there is so much I want to tell you, a lot has been running through my head lately. I'm having trouble putting my thoughts into words so you will have to bare with me through this. I keep thinking about the future, about life, and what I want out of it. I keep thinking about us and what this relationship means to me. I keep thinking about these things and I realize they go hand in hand. This relationship is my future; it's what I want out of life. I want to grow old with you. I want to experience this crazy love forever and ever, and I really think I'm going to get to. I want us to walk through new houses picking the one that would be just right for us. I want to see you walk around our house in a big t-shirt with your hair down and catch me staring at how gorgeous you are. I want you to pull the covers off me at night and then I have to get even closer, if it's possible, to you to keep warm. I want to see you laugh like crazy at me when I do stupid stuff. I w
Read more

Romance scam letter(s) from David Lopez to Sharon (USA)
I hope you are doing well and also having a wonderful time with you today as i am having now..I am about to go and have a little meeting with one of the commanders' and i am now dropping you these lines because i am missing and thinking of you so much and you have you been on my mind and thoughts all day and night now...What a wonderful ending of a year! It began late in the previous year -- me finding you, chatting on-line, confessing my love, and then it happens all over now that i am in love with you. The feelings that Ia?™ve felt for you all along begin to resurface. Only this time, I am free to act on them without fear of upsetting anyone.

Thank you, My Love. What more can a man say to the woman who opened her heart to him, allowing him to feel the warmth of her love across the great distance that separates them? You truly have no idea what I feel for you.I try to put this feeling into words, but fail miserably. This feeling of being both scared and at peac
Read more

Romance scam letter(s) from David Lopez to Eloha (USA)
Hi! My name is Williams Lopez, I like your profile and want to know you better. I'm looking for serious relationships. If you are interested in me you give me your e-mail and we'll talk through it or better reply back on my e-mail for us to start communication. Regards Email: williamslopez843@hotmail.com Skype: williamslopez843