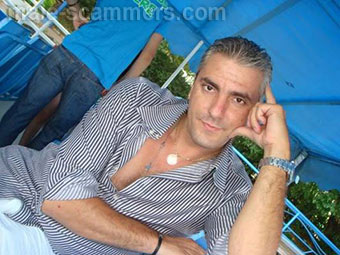 REPORT N1 (added on January, 15, 2014)
Manon (Canada)
I met Darius Utah on Mingle2 early December 2013, saying the search for true love. We have been in contact for 40 days very intensively several times a day. We chat on Yahoo Messenger and share photos. He says working for the U.S. Government as International law enforcement agent for antiterrorist squad and be on a mission to Nigeria. He said he had two twins 17 years he had custody. It presents itself as a great traveler, a man who has seen death closely and knows what he wants and does not want to waste time. He says after a week being in love and wants to be married. He was ready to come in my city, dating for few weeks, and leaving together. I was supposed to retire in about a month and plan making money with diamond trade and invest is money buying a business. He often insists on erotic photos, but I always refused.
Being in the context of a difficult separation, one day I had to find the money to move quickly to move. It offers me to buy diamonds and it would help me for resale upon arrival. I send to his Nigeria collegue HENRY OMOROGBE $ 5,000 and other amount to Henry's fiance BEATRICE ONI ENOGHAYIN. This first deal was supposed to binds us together as Llover partners¦. One day, he told that his safety was compromised with his work and he needs money to leave the country quickly. His money was block in the bank and there was many administrative problems and no time to manage. He insists and sees me as the only person who can help and asking for $ 5,500. Ne showed me a makup identity card of the CIA as a private consultant. He made cruel psychological pressure on me and despite my attempts to cut off every contact, he worked hard to keep me and use romantic ecard because he is advised when I view it. Sometimes I feel I talk to many different people, and surely did. He had a front on Facebook account that he quickly blocked me then I can't see his friend anymore. I find a gmail account at is name link with another Scammer recognized Basten Boadu. Is this the same scammer? Please be very careful and DON'T SEND MONEY !
REPORT N2 (added on August, 13, 2014)
Asia (UK)
Has contacted thru facebook, Usual story, widow, single dad, working away from home.... Told me a woman on f/b was his cousin, but I contacted her and he was romantic with her and even proposed. Have contacted other woman he has links with... same story....