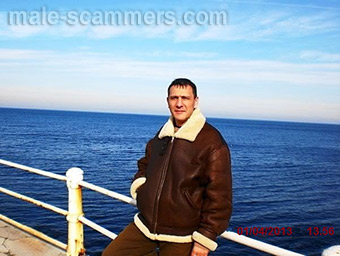 REPORT N1 (added on November, 29, 2013)
Ann (Romania)
He contacted me on Facebook and we had a decent and interesting conversation by mail, chats and telephone calls for about one month. He claimed he was an engineer working on oil platforms. At some point he went on a voyage to New Zealand; he promised that once he finished his voyage he could fly from New Zealand and he could come to see me. But, while he was off the coast of Malaysia he said their ship broke down and they were attacked by pirates. He was scared and wished to send his valuables along with the sum of 103,000 GBP to me least the pirates come again and steal his belongings. I will attach that letter. I accepted although I thought that if he did not declare the money there would be a problem. I paid for the shipment of that box but eventually the money was discovered by the Malaysian custom officers and the shipment was retained. He claimed he was still on the ship and needed me to pay the fine so as to release his box. But things got mixed up, they wanted more and more money so I told him I could not pay any more. He went back to UK to get the rest of the money. Then he said that the shipment could be released and he would come to my country to be sure I get it. Which he never did. Again he lacked money for the flight ticket, money to send to his son. In the end when I kept refusing him, he said he found money to come over. But he had an accident on the way to the airport and later he called that he was kept in the hospital because his insurance was not covering the cost of surgery and everything. And the whole thing stopped here, I never heard from him any longer.

Romance scam letter(s) from Brett Wood to Ann (Romania)
My dear Love,
Thanks so much for your prayers.I so much trust you and I know you will never disappoint me, i ought to have sent this mail earlier than now, because we were trying to fix the ship. The security firm will contact you. Honey pray for me as the situation is getting worst and we are still waiting to hear from the rescue team.

I have sent all my valuable and my contract documents with the sum of (?103,000) one hundred and three thousand GREAT BRITAIN POUNDS) through Airpac diplomatic Secured Security Company. This an independent security company in the sea shore here who are in charge of handling of freights and other consignments.

They told me they will contact you for the delivery when they arrive kuala lumpur ( the capital of ) Malaysia because labuan is off the coast of Malaysia morning. I have never trusted anybody in my life to entrust such money in his/her hand, but I so much trust you.The documents are the most important to me for they conta
Read more